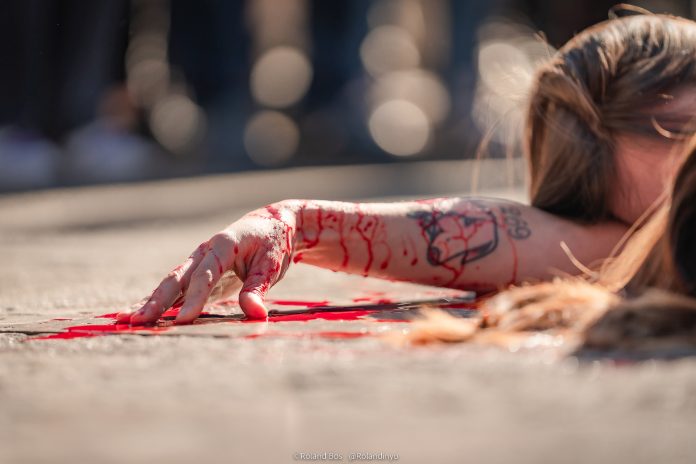 Despite the cold weather, more than 50 people stripped naked for a high-impact protest against the use of animal skins.

In this protest, which took place in Barcelona, the participants demonstrated completely naked, sprayed with artificial blood and piled on top of each other, as the bodies of lifeless animals remain after their skin has been torn off. The objective is to make the population aware of the enormous number of animals that are used to make a single fur coat and to press for a debate that leads to the closure of all fur farms in Spain.

“More and more developed countries are banning fur farms and Spain is at the bottom of Europe, once again,” says Gemma Guaza, coordinator of AnimaNaturalis in Barcelona. “Wearing animal skins is not only inefficient and anachronistic, but intensely cruel to animals,” Ella adds. Minks, ferrets, foxes, rabbits, seals, otters, cows, chinchillas, and in China even dogs and cats, are part of the wide group of animals that are killed to turn their skins into clothing or fashion accessories.

Annually more than 32 million animals are slaughtered in the European Community alone to trade with their skin. Countries like the United Kingdom, Austria, Italy, Croatia, Greece, the Czech Republic, Sweden, Germany and the Netherlands have been banning fur farms, as well as increasing their regulations regarding animal protection. In addition, the debate to ban animal farming for fur has started in Bulgaria, Lithuania, Montenegro, Poland, Ukraine and Latvia.

“The ethical reasons that have led these countries to ban fur farms are not enough in Spain, which has become a refuge for businessmen who profit from the lives of animals,” adds Guaza.

On fur farms, animals spend their lives locked up in small cages until they are gassed or electrocuted via the mouth or anus, before being bled and torn to pieces. Most of them are still conscious at that moment, so they can feel their skin being ripped from their bodies.