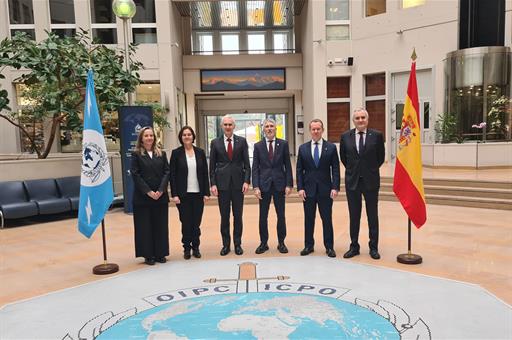 During an event held in Lyon, Spain’s Minister of the Interior, Fernando Grande-Marlaska, highlighted the “outstanding role” played by Spain in Interpol since its creation in 1923 and reaffirmed the country’s commitment to the organisation.

“The quantity and quality of the information exchanges, the volume of records contributed to the databases, the number of detainees for extradition and the intervention in a large part of the organisation’s operations endorse this commitment”, the minister pointed out during his visit to the headquarters of the international police organisation.

Currently, four National Police and Guardia Civil agents are stationed at the Interpol headquarters in Lyon, and one more at the Innovation Centre in Singapore. Throughout 2022 Spain has collaborated with Interpol in the arrest of 83 people claimed abroad and 398 fugitives located in Spain. 228 extraditions have also been executed, 95 of them corresponding to those claimed by Spain and 133 to deliveries to other countries.

The Interior Minister was received upon his arrival at the Interpol headquarters by its secretary general, Jürgen Stock, with whom he held a working meeting, in which Stephen Kavanagh, executive director of Police Services; María Guadalupe Medina, chief of staff of the general secretary; and Maria Berger, Interpol Strategy and Policy Adviser.

Grande-Marlaska took advantage of the visit to congratulate the Secretary General on the centenary of the creation of Interpol, which is celebrated in 2023, and has expressed Spain’s desire to continue collaborating with the organisation “as a relevant actor, a reflection of the role of our country in its geostrategic position, as a bridge of cultures and a link between continents”.

In this line, the Minister of the Interior has promised to work during the next Spanish presidency of the European Union to promote the integration of Interpol in the development of Ameripol, the American police organisation, as well as to advance in the negotiations between Interpol and the European Commission so that EU agencies can access the organisation’s databases.

He also highlighted the Spanish commitment to continue increasing police cooperation with African countries, especially in regions such as the Sahel or the Maghreb, and in matters such as the fight against terrorism or human trafficking, areas in which Spain accumulates extensive experience through joint research teams and other bilateral and multilateral projects.