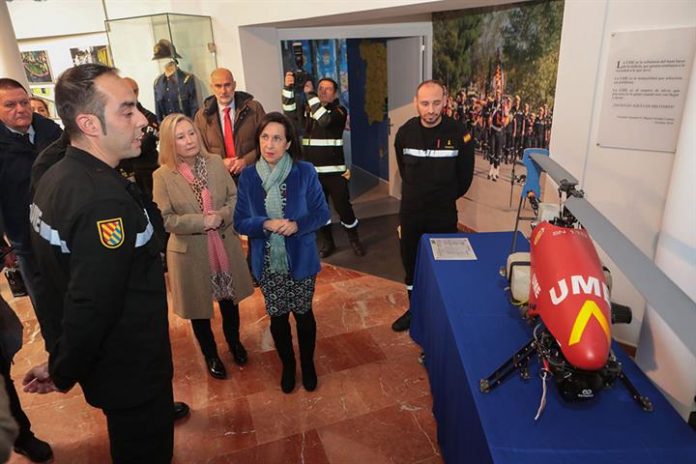 The Minister of Defence, Margarita Robles, has learned about the Drone Unit of the Military Emergency Unit (UDRUME), a newly created capacity that responds to the effort to improve the response of the Armed Forces in complex situations and that will allow them to operate in the aerial, terrestrial and aquatic areas, the latter two being the greatest novelties.

This is both an operational and training unit, which will have high technology and will be a benchmark for the Military Emergency Unit (UME) members in the teaching and use of unmanned aerial systems, also known as RPAS. Its final installation will be located at the ‘Conde de Gazola’ Army Military Base, in San Andrés del Rabanedo (León).

The minister then attended the screening of a video about the unit and a presentation by the UME Chief of Staff, Army Colonel Pedro Aneiros, in which it was highlighted that the main missions of UDRUME will be the intervention and reinforcement of battalion capacities when it comes to intervening.

During a static presentation of drones, Robles has been interested in the characteristics of each of them and has shown a special interest in those that were used recently during the eruption of the La Palma volcano. Likewise, she has learned about the latest acquisitions and has attended a live simulation of the flight of a drone for collapsed structures.

“Drones represent the most qualitative, essential and fundamental leap in that important task that the UME has, which is the fight against emergencies and finally the protection of human lives and saving people”, Robles has pointed out about the UDRUME, which is expected to reach its initial operating capacity by the end of 2023 and its full capacity in June 2025.

The minister also highlighted that in the different emergencies in which the unit has used drones, such as search and rescue, floods, forest fires or the ‘La Palma’ volcanic operation, these vehicles have been shown to be a great tool that helps preserve the safety of those affected and those involved.

Robles also thanked the UME for being every day “an example of commitment and efficiency” and “for always being present where necessary”.

During his presentation, the UME Chief of Staff stressed that drones will enable a better assessment of disasters and emergencies, which will allow faster and more effective actions to be carried out.

“We will obtain more real information about what is happening and we will be able to intervene more efficiently. With this unit and these means that we want it to have, we are going to be at the forefront of everything related to the biological and chemical,” said the Colonel Aneiros.

The UME thus consolidates its predisposition to improve its procedures and expand its capacities as a result of the experience acquired and in favour of the evolution of new technologies. UDRUME will also be a teaching centre and a benchmark in the training, perfection and training of operators.

The act was also attended by the Secretary of State for Defence (SEDEF), Amparo Valcarce, who stressed that the new unit represents a milestone that responds to the ever-increasing demands of the missions faced by the UME, and that it is the result of technological progress, innovation, research and high-quality training.

“I think that today marks a new milestone, because it will mean a complete technological revolution within the UME, which will put it at the forefront of emergency services and action in the face of major catastrophes, not only in Europe, but in the world. “, said the SEDEF.

As Valcarce has highlighted, the development of the unit will be a “pole of attraction” that will have a very positive impact on the one hand on academic relations with the University of León, but also on the collaboration and reinforcement of the industrial, technological and business fabric of León and its environment, in line with the policies promoted by the Government.

The operational and training capabilities of this unit, which will report to the UME Transmission Battalion (BTUME), will be focused on handling drones in air, land and water scenarios. The areas of action will be Command and Control, Intelligence, Intervention, CBRN (Nuclear, Radiological, Bacteriological and Chemical) and Logistics. In addition, they will have special technological capabilities such as 3D mapping, CBRN sampling or hyperspectral imaging, which allow details invisible to the human eye to be captured.

The location in the province of León is due to the fact that it is a strategic place due to its proximity to other institutions with which to generate synergies, such as the Field Artillery Command, the Air Systems Obtaining Group, the Cuadros, from the National Institute of Aerospace Technology (INTA) and the León Military Aerodrome, among others.