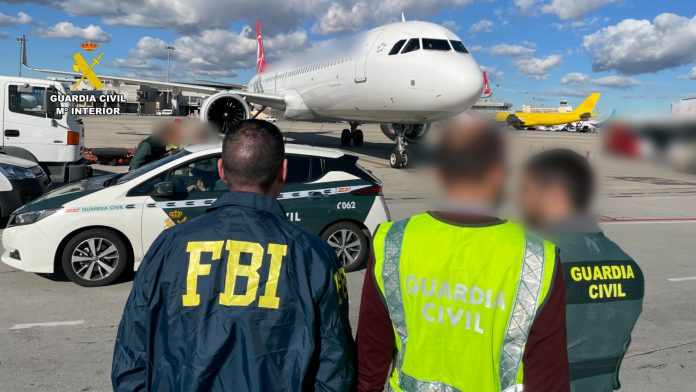 The Guardia Civil, in collaboration with the Federal Bureau of Investigation (FBI) and the Homeland Security Investigation (HSI), of the United States, within the framework of Operation Magnolia, has proceeded to arrest a British citizen at the request of the authorities for the crimes of fraud, infringement of the Law of International Emergency Economic Powers of the United States and money laundering, under the legal regulations of that country, for the imposition and compliance with the sanctions imposed on individuals and legal entities of Russian origin .

Said arrest occurred at the Adolfo Suárez–Madrid Barajas Airport (Madrid), when agents detected the presence of this person.

The detainee is suspected of fraud and money laundering in favour of a Russian citizen and owner of a Russian commercial conglomerate with interests in the oil, energy and telecommunications sectors.

It should be noted that this Russian citizen was subject to a sanction in April 2018, by the Office of Foreign Assets Control (OFAC), of the US Department of the Treasury, after the annexation of the Crimean Peninsula by the Russian Federation of the year 2014, and again, after the Russian invasion of Ukraine.

The object of the sanction is the actions of this Russian citizen for or in favour of the government of the Russian Federation, as well as for his operations of a technological nature in said State.

The detained British citizen is the owner and administrator of a commercial company based in Palma de Mallorca (Balearic Islands), dedicated to the maintenance and provision of administrative services to boats. Among his clients and managed vessels, there was a yacht owned by a Russian citizen who is prohibited from operating in markets and with US financial and commercial entities. This yacht was used by said Russian citizen and his family environment.

Likewise, the company of the detainee provided services aimed at satisfying the personal needs of the owner and users of the yacht with knowledge of the existence of sanctions and prohibitions on this person. To get around them, the detainee designated the yacht with a pseudonym so as not to arouse suspicion. In this way, he provided services and goods to the yacht itself, to its owner and its users, for a value of US$485,149.03, according to US authorities.

Likewise, the detainee and his company received considerable profits by approving and coordinating the yacht’s annual operating budget, which states that a large part of said budget was allocated to the fees paid to the yacht’s management company itself.

The investigators calculate that the detainee and his company earned approximately more than 800,000 euro for the administration of the yacht.