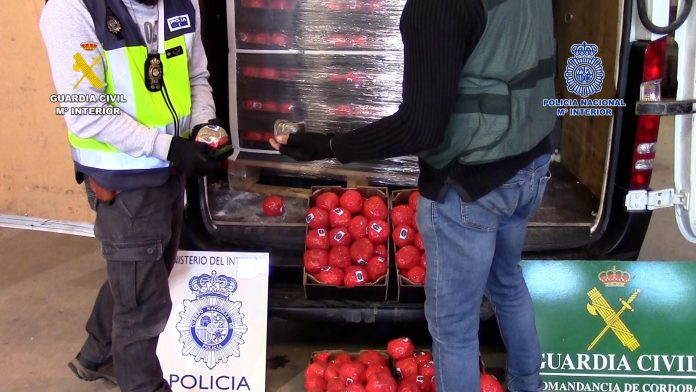 Agents of the Guardia Civil and the National Police, as a result of the exploitation of the so-called “Operation Califa Trucks”, have arrested ten people as alleged perpetrators of a crime of drug trafficking between Spain and France.

The operation involved 22,370 kilograms of cannabis resin, numerous state-of-the-art mobile phones and the seven vehicles that the criminal organisation had. They had concealed the drug inside fake tomatoes to make it difficult to detect. There are ten detainees, eight of whom have already been imprisoned by order of the judicial authority.

The operation began after detecting the existence of a criminal organisation, based in Córdoba and operating in different provinces, which was allegedly engaged in drug trafficking mainly between Spain and France.

With the progress of the investigation and as a result of the collaboration between the Guardia Civil and the National Police in the provinces of Córdoba, Málaga and Cádiz, it was possible to identify the main members that made up the criminal organisation that was dedicated to the trafficking of large amounts of drug.

This organisation was strongly rooted in Córdoba, in whose capital its leader resided, who used a circle of trust with which he formed the different levels of the criminal network. It had an immediately lower step that was in charge of directing the logistics necessary for the operation of the organisation. In addition, he would be in charge of another resident of the capital in charge of those tasks necessary for the transport of narcotic substances, as well as another collaborator who would mainly carry out the security and custody tasks entrusted to him by the management of the network.

Likewise, the organisation made use of several people who, some in a more stable manner and others in a sporadic manner, would carry out the tasks of greatest risk, such as custody, security, and loading and unloading of the narcotics.

The progress of the investigation made it possible to find out that the criminal organisation had a complex structure, rich in human, technical and material resources and with a strong economic capacity. This, together with extensive logistics, hidden behind an apparent business legality, greatly hindered the operational and analytical work carried out on the different entities that comprise it. For this they used “straw” people, with no other responsibility than to appear as managers of the companies used for the rental and/or acquisition of vehicles, real estate, etc.

More than 22 tons of hashish seized

On January 10, investigators were able to find out that the organisation intended to distribute a large drug shipment, managing to detect one of the vehicles used by those now detained in an industrial estate in a town in the province of Malaga. They moved several pallets of boxes that apparently contained tomatoes to a van that, once loaded, set off. When intercepting the van, it was found that it was carrying 2,600 kilos of hashish distributed in several boxes of false tomatoes. The driver and sole occupant of the vehicle was arrested.

In view of this intervention, and as the investigators suspected that a greater quantity of drugs could be hidden in various warehouses in the industrial estate in the town of Malaga, they proceeded to search them, locating another approximately 19,700 kilos of hashish resin inside. The drugs were hidden in 18 large pallets that contained balls of hashish that pretended to be tomatoes. Two people who tried to hide under a truck were also arrested.

Faced with the apprehension of these two caches of hashish resin, the agents proceeded to exploit the operation, which took place on January 11 and 12, jointly and simultaneously carrying out four searches in the province of Cordoba. Subsequently, the leader of the organisation and its main members were arrested. The operation continued with the arrest, on the 17th, of three other people involved. The investigation remains open and new arrests are not ruled out.