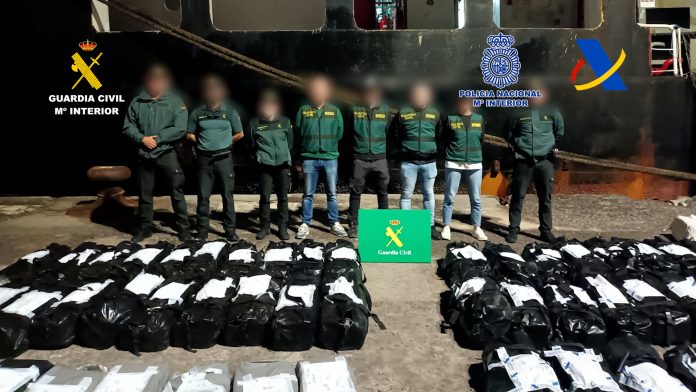 The Guardia Civil, in collaboration with the National Police and the Tax Agency, has intercepted a freighter named ‘Blume’ and the Togolese flag, 80 miles east of the Canary Islands, with nearly 3,000 kilos of cocaine.

The 15 crew members of the boat have been arrested in the operation. The boarding of the ship, carried out by the Special Operations Ship ‘Fulmar’ of the Customs Surveillance Service of the Tax Agency, was highly complex, given the state of the sea and the large dimensions of the freighter.

The operation started as a result of international collaboration, in which investigators from the Guardia Civil, the Customs Surveillance Service, and the National Police and, from the exchange of information produced between the Centre for Analysis and Operations of the Atlantic (MAOC- N) and the Intelligence Centre Against Terrorism and Organised Crime (CITCO), determined the possible involvement of a vessel suspected of illicit drug trafficking from South America.

As a consequence of this, the Deputy Directorate of Customs Surveillance of the Tax Agency established the aeronautical device and sent its ship ‘Fulmar’ to locate and, finally, board the freighter at dawn on the 18th.

At the time of the boarding, it was observed that the freighter was transporting some 200 tons of coffee as declared merchandise, well below the actual cargo capacity of the ship, which drew the attention of the officials in charge of the operation.

Subsequently, in an inspection of the common areas of the cargo ship, the presence of an indeterminate number of bales of those usually used for cocaine trafficking was detected, for which reason the 15 crew members of the vessel were arrested, two citizens of Albanian nationality and 13 of Pakistani nationality, as well as the seizing of the ship, which together with the detainees has been transferred to the port of Santa Cruz de Tenerife.

The boarding conditions have been very complicated due to the sea situation and the large size of the ship. Despite this, the rapid action of the ‘Fulmar’ and its crew have prevented a possible transhipment of the drugs to other vessels, which would have compromised the detection of the cache.

The detainees, the boat, the drugs and the police proceedings will be turned over to the Central Investigating Court acting as the National Court.

This operation, directed and coordinated by the Anti-drug Prosecutor’s Office of the National Court, is added to those carried out to date on the so-called ‘Atlantic Route’ of cocaine, known for being used by fishing boats, merchants and freighters that, coming from South America, tranship narcotic substances in the middle of the Atlantic for their subsequent introduction into the European continent.