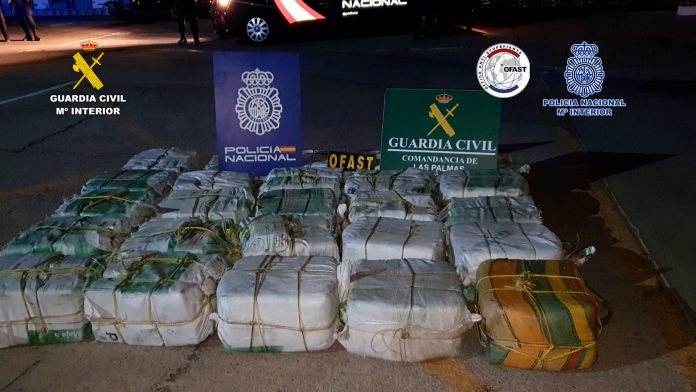 Agents of the Guardia Civil, in a joint operation with the National Police and the French OFAST (Office Anti Stupéfiants) coordinated by EUROJUST, have dismantled a criminal organisation dedicated to sending cocaine to Europe by means of sailboats.

The drug was distributed throughout the Spanish provinces of Cádiz and Málaga as well as the Ile de France region, which includes Paris and its metropolitan area. The network, based in Marbella and Paris, prepared cocaine shipments from the Caribbean to Europe on sailboats captained by one of the organisation’s members. It had two ramifications: a French branch, which dealt with the distribution of the drug, and the Spanish branch in charge of contacts with the organisations supplying the narcotic based in Colombia and Venezuela.

The investigation began in the summer of 2021 when the Guardia Civil learned of the arrival of a sailboat in El Puerto de Santa María (Cádiz), captained by a French citizen, who could be linked to cocaine trafficking.

The police actions carried out revealed the links between this individual and a second French citizen who was being investigated by the National Police for his alleged relationship with international drug trafficking. For this reason, the agents requested information from the French police authorities through the OFAST (Anti-Narcotics Office) in order to know the profile of those investigated.

The first of them is known in France for his links to drug trafficking by sea, having been rescued in 2018 in the English Channel after a solo captained sailboat sank and on which there were indications that he was transporting cocaine. The other individual had no police record, although one of his brothers is closely related to cocaine trafficking in Paris, the organisation itself being in charge of introducing the drug into France in large quantities.

Creation of a Joint Investigation Team between Spain and France

The agents detected an increase in the number of meetings between those investigated and several French citizens settled in the Malaga city of Marbella, some of whom were historical members of the Marseillaise mafia. Among the contacts observed is a well-known French criminal linked for decades to organized crime and bank robbery, who had also been convicted in France of murdering a police officer during a robbery.

In the autumn of 2022, investigators observed the organisation speeding up preparations for what appeared to be an ongoing operation. In this sense, they noticed an increase in the trips of the principal suspect in Spain to meet with his Venezuelan partners in different parts of the country. Likewise, he continually travelled to Paris where, together with his brother, he visited an apparently empty apartment where they both put in and took out various boxes and packages. At the same time, the first suspect -who was based in Paris- acquired, repaired and conditioned a sailboat in Martinique for transoceanic navigation.

It was in the month of November when this last individual went to Martinique where, after staying for a few days and getting supplies, he began sailing alone aboard the sailboat. Although France was declared as the final destination, the sailboat did not head to Europe but instead sailed south and stayed a few hours north of the Isla Margarita area, later changing course and began the journey to Europe by way of the Azores.

Coordinated arrests and searches in Spain and France

Through the Intelligence Centre against Terrorism and Organised Crime (CITCO), the agents requested collaboration from the Spanish Navy to proceed with the boarding of the sailboat used by the organisation. An investigation team made up of agents from the Guardia Civil, National Police and OFAST embarked together with the Navy soldiers to carry out the assault on the sailboat on the high seas.

Despite the bad sea conditions, at the end of last December a GEO team boarded the sailboat west of the Azores Islands. Inside it, 25 bales of cocaine were found, which yielded a total weight of 740 kilos of drugs. They also arrested two people; the first of those investigated, a French national, and another Venezuelan man who served as a “notary” and who had boarded the sailboat with the cocaine on Isla Margarita.

This intervention precipitated the exploitation of the operation on land, with arrests and searches carried out in a coordinated manner in Spain and France. In Spain, 52,450 euro in cash were seized, two firearms located at a home in Salamanca, two satellite routers for boats, vehicles and multiple mobile terminals, some of them with encrypted communication systems. On the other hand, the apartment in France where the brothers had been seen, located in the centre of Paris, turned out to be a drug nursery where another 345 kilos of cocaine and a firearm were located. In addition, 745,500 euro were involved in other searches.

The operation, which has ended with the arrest of 15 people -among which are the leaders of the organisation, those in charge of transport, the drug distributors in France, financiers, closest collaborators and representatives of the supplying organisation in Spain- has allowed the complete dismantling of the criminal organisation.