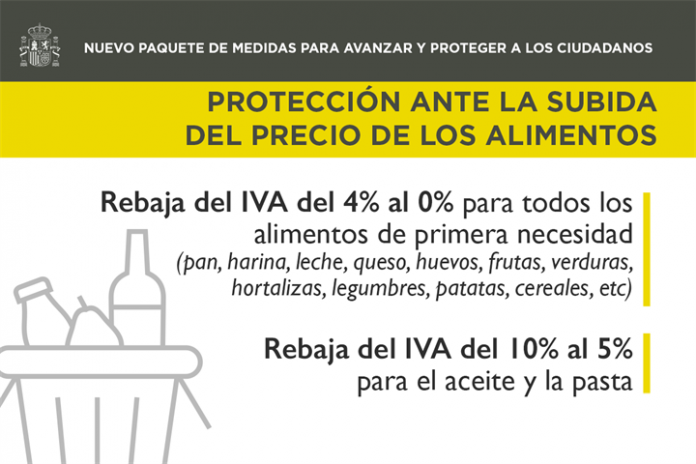 The Government has reduced the IVA tax on fresh or staple foods during the first half of the year to alleviate the rise in prices caused by the war in Ukraine.

The initiatives adopted by the Executive throughout the year 2022 have made Spain the European Union country with the lowest inflation in November, but the war continues to affect the general level of prices, especially of certain fundamental goods such as foods.

To alleviate this increase, the Government has abolished from January 1, 2023 the Value Added Tax (IVA) on products that already had the reduced rate of 4% and, in addition, has lowered the tax from 10% to 5% on oils, including olive oil, and pasta. In this way, it is intended to alleviate the situation of families, especially those with low incomes, who dedicate a greater part of their income to acquiring these goods.

What foods does the VAT reduction from 4% to 0% apply to?

Fruits, vegetables, legumes, tubers and cereals that have the status of natural products in accordance with the Food Code and the provisions issued for its development.

What foods does the IVA reduction from 10% to 5% apply to?

How long will the VAT reduction be maintained?

These tax reductions will remain in force until June 30, 2023. In the event that the interannual rate of underlying inflation (which excludes energy and unprocessed food) for the month of March is less than 5.5%, the validity will end on May 1, 2023.