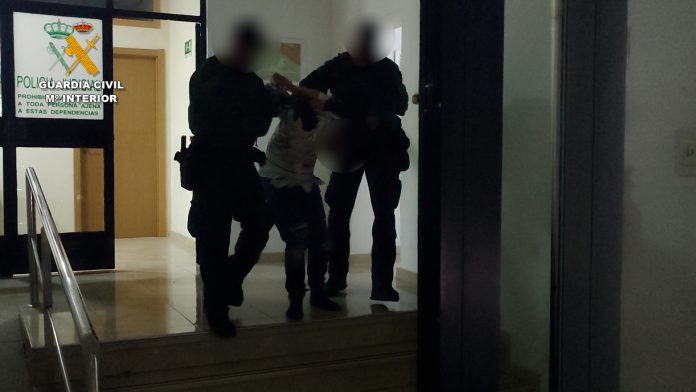 The Guardia Civil, within the framework of the Cardador operation, have arrested JMV, a 32-year-old male known as “El Lana”, leader of the most important and violent hashish drug trafficking organisation that operated mainly on the Guadalquivir River.

The arrestee, who escaped from justice in 2018, had been investigated in recent years in different Guardia Civil operations; highlighting the Cansino and Llorón operations, carried out in 2018-2019, where more than 10 tons of hashish and 2 kg of cocaine were intervened, 10 go-fast type inflatable boats, numerous firearms (Kalashnikov war rifles, pistols and revolvers), as well as a large number of stolen vehicles, among others, were seized.

The drug trafficker known as “El Lana” is a violent and very meticulous person, who adopts numerous security measures both to commit criminal acts and in his personal life.

From the investigations carried out by the Guardia Civil, it was found that this person could return to the town of Seville to spend New Year’s Eve with his family. Faced with this possibility, during the days before New Year’s Eve, a device was established in different areas of Aljarafe in order to locate the possible meeting place.

Finally, as a result of the investigations, it was possible to locate in Umbrete a chalet used by the family of the fugitive that could correspond to the possible meeting place on New Year’s Eve.

For this reason, the agents established a device on said chalet on the 31st, and the investigators managed to detect JMV in the evening. It should be noted that this person on the occasions that he left the house took security measures, wearing his head covered to make it difficult to recognise him.

On one of the occasions when he left the house, the agents who were deployed in the area quickly proceeded to arrest him, the detainee carrying a pistol and false documentation.

The Investigation Units had spent years compiling information on the possible whereabouts of JMV, of which it has been learned that, using false documentation and encrypted communication systems, he has been recurrently changing his residence and living in different cities in Spain to avoid be stopped.

The detainee has a long history of drug trafficking and had three current warrants for search, detention and appearance by the Courts of Coria del Río (Seville), Seville and Cádiz.

Once brought to justice, the detainee has entered prison by order of Court No. 8 of Seville.