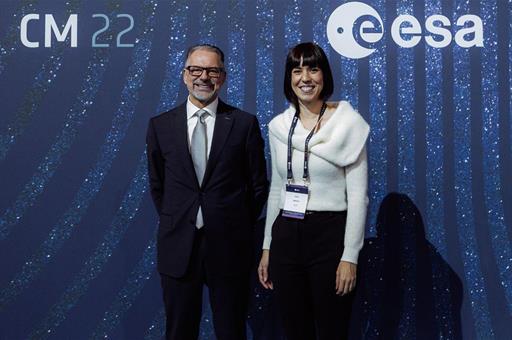 The Minister for Science and Innovation, Diana Morant, has participated in the Ministerial Council of the European Space Agency (ESA), which has brought together representatives of the 22 member states to reinforce the European space objectives.

Morant highlighted the commitment of the Government of Spain to the aerospace sector by increasing Spain’s annual quota to ESA by 50% since 2019. Spain will allocate 1,5 billion euro to the European Space Agency (ESA) over the next five years, which will strengthen the country’s leadership in space, she says.

She has also pointed out that this investment translates into more opportunities for Spanish companies following the georeturn criteria and increases the ability to lead space programs in Europe.

ESA member states receive contracts for a value proportional to their contribution to the agency and it is estimated that this investment provides companies with an additional turnover of more than two euro for every euro invested.

In recent years, the coefficient of return on contracts for Spanish companies is 106%, which represents a surplus for Spain of 74 million euro.

In addition, space is a key instrument for tackling major social challenges, including the fight against climate change, the prevention of natural disasters, cybersecurity or telecommunications with the aim of improving people’s lives.

ESA has just approved the ARRAKIHS mission, the first mission of the Scientific Program of the European Space Agency that will be led by Spain. This project aims to study the existing dark matter in the universe, five times more abundant than ordinary matter.

Additionally, the Spanish contribution and the capacities of the national industry will provide and consolidate the leadership of relevant projects associated with security in space or Earth observation such as the EU-ESA Copernicus program, which has been providing data from multiple events such as La Palma eruption.

Spanish companies will also opt for the leadership of the new satellite navigation initiative, which will complement the Galileo system (European GPS), called LEO PNT.

The Government of Spain will promote new initiatives for ‘start-ups’ through the ESA incubation centres (ESA BICS), which will double their number and will be financed with this same budget.