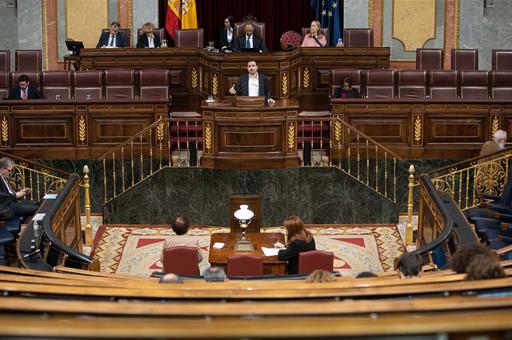 The Minister of Consumer Affairs assures that the ecological transition cannot wait “one more minute” and that the climate crisis is “also a threat to access to safe and affordable food”.

The Minister of Consumer Affairs, Alberto Garzón, has defended consumers as “the centre of a transformative production and consumption model that does not ignore planetary limits or break the ecosystem balance of life.”

This has been stated in his appearance at the plenary session of the Congress of Deputies on the 2023 General State Budget (PGE), where the minister has outlined the programs and policies to which he will allocate the 63.69 million euro -11 38% more than in 2022- for next year.

As he explained, his department has been working for three years to “place consumers as protagonists, and not as mere recipients, in ecological transformation.” Mainly, he added, because policies related to healthy consumption, food safety and ecological impact are currently marked by “two serious historical events: the invasion of Russia into the territory of Ukraine and the climate crisis”.

Given these facts, Garzón has warned that the ecological transition “cannot wait another second.” “Climate change is a clear threat to biodiversity and food systems, but also to access to safe and affordable food, to maintain employment, the future and the sustainability of the primary sector,” he added.

This is one of the reasons why the Spanish Agency for Food Safety and Nutrition (AESAN) increases its budget by 7.19% compared to 2022. Thanks to this, this body will intensify its inspection, surveillance and control work in its respective research centres and will promote the development of policies linked to the One Health concept.

According to Garzón, the Ministry of Consumer Affairs will continue to promote sustainable eating patterns and will intensify the work of AESAN experts regarding recommendations so that menus for schoolchildren and nursing homes are of higher quality.

Likewise, a new five-year Aladino study will be launched (the last one was carried out in 2019) with the aim of obtaining the first scientific data on how the Covid-19 pandemic has affected the diet and health of minors. “We continue to deepen the line of work on healthy and sustainable diets. In a country with 40% overweight and obesity among boys and girls between the ages of 6 and 9, a better diet means better health,” the minister remarked.

In the chapter on betting and gambling policies, Garzón reported that the budget for the General Directorate for the Regulation of Gambling (DGOJ) increases by 9.46%, which will make it possible, among other issues, to reinforce the fight against fraud in sports betting and finance research projects for the prevention of disorders caused by gambling.

As a novelty, the Minister has highlighted that a mechanism for detecting players with risky behaviours will be launched. To do this, as he explained, an algorithm will be created, based on scientific prevalence studies and risk assessment models, which will allow knowing when an online player may be engaging in dangerous or addictive behaviours.

In addition, the DGOJ will promote the signing of agreements with the Autonomous Communities to interconnect the registers of autonomous self-prohibited persons and protect people in a situation of vulnerability. “It is a historical demand of the associations of ex-players and rehabilitated players that we are going to comply with after the final approval of the modification of the Gambling Regulation Law,” Garzón added.

Finally, the minister has detailed the programs to promote protection policies for consumers and users, to which more than 17 million euro will be allocated (17.27% more than in 2022).

In addition to the creation of a new general sub-directorate for inspection and sanctions under the General Directorate for Consumer Affairs (DGC), in 2023 the modernisation and digitisation of centres such as the Research and Quality Control Centre, the Consumer Observatory on the Internet or the European Consumer Centre. The Consumer Arbitration System will also be promoted with different subsidies for the regional and local Consumer Arbitration Boards.

The Minister also emphasised the continuity of the work for the regulatory development in terms of universal accessibility in labelling. “We want consumers to know their rights, but, above all, to be a leading part of the changes and transformations to achieve a more just, equal and sustainable society”, he concluded.