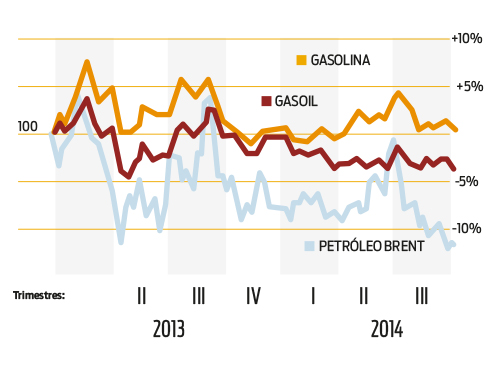 The OCU consumer association is highlighting that motor fuel companies are not passing discounts onto consumers, in fact fuel prices have been increasing, despite the fact that oil is now so much cheaper.

According to the association, in the last 5 months, oil has become 40% cheaper, but this price drop is not reflected in what the consumer ends up paying. Diesel has dropped only 6% and gasoline 8.4%.

The group says that, once again, the consumer pays the bills for an opaque system.

Since the beginning of the summer, the price of a barrel of Brent (the type of oil that serves as a reference in the European markets) has fallen by 40% (after marking maximums in June).

This clear trend is hardly reflected in the fuel. Diesel has only dropped 6% and gasoline 8.4%.

Retail prices behave as if nothing had happened, resulting in higher prices for most products, as well as an impact on our direct costs.

The Spanish Government is currently funding a 20 cents discount on each litre of fuel purchased, but it is not yet known if that discount will continue beyond the end of the year, whilst the fuel companies are still benefitting from higher prices.