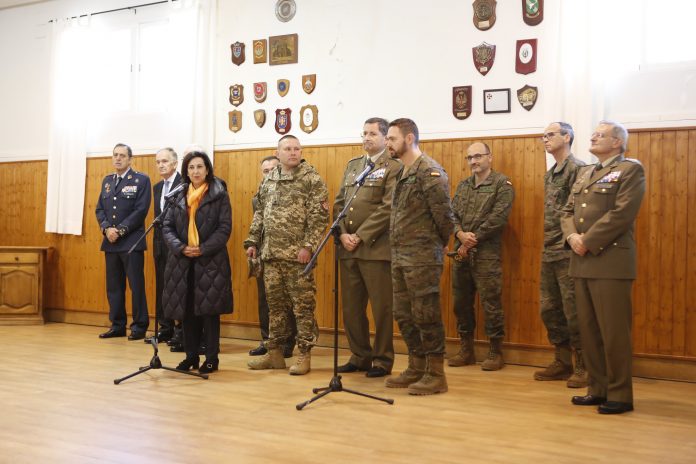 The Minister of Defence, Margarita Robles, visited the facilities of the Training Centre of the Toledo Infantry Academy, where part of the so-called ‘Toledo Training Command’ (TTC) has already begun. Upon her arrival, she was received by the Chief of the Defence Staff, Admiral General Teodoro Esteban López Calderón; as well as by the Chief of Staff of the Army, Army General Amador Enseñat y Berea; and by the director of the Toledo Infantry Academy, Colonel Álvaro Díaz Fernández.

During the visit to the facilities, the minister was able to learn how the Academy has been conditioned to receive Ukrainians and has visited the living area, where the bedrooms, internet rooms and rest areas are located, and has also toured some of the classrooms.

At the end of the visit, the Ukrainian military attaché gave the minister a scarf from the Ukrainian colonel Yulia Tapaciok and told her that Ukrainian women do it to raise money.

The minister has held a meeting with the Ukrainian military who are being trained in the TTC. After welcoming them, she wanted them to feel at home and to transmit to their families the appreciation, affection and support of all Spaniards.

Robles thanked them for the effort and courage of the Ukrainian people because they are defending “not only their country, but values ​​such as freedom, democracy and peace in the world.” “Defence is not only that of his country – she stated – but that of free countries and that is why Spain is supporting Ukraine”.

Finally, she expressed his gratitude to the Army and the Armed Forces for this work and for the work they carry out abroad in defence of peace.

The Spanish Armed Forces train Ukrainian military personnel in Spain. Initially, five independent training areas have been identified, which the Army will provide to each of the rotations that arrive in Spain, according to the needs requested by Ukraine at all times.

The Land Force has been designated to lead these training activities, being supported by the rest of the First Level Commanders of the Army.

The training programs that Spain has offered deal with basic training, treatment of combat casualties, precision shooters, action against improvised explosive devices, demining areas, howitzer 105/14 and other areas that may arise.

The courses will be taught by the “Toledo Training Command”, whose main location will be the facilities of the Toledo Infantry Academy. To this end, some of its facilities have been conditioned to accommodate the Ukrainian military. Thus, the Engineers Unit has been working, in coordination with the General Inspectorate of the Army and the ACINF, on these works since last October 24. The primary interest of the Army is to ensure comfortable facilities in order to offer all the necessary services to the Ukrainian personnel who attend these courses.

The first basic training course began last Monday, November 14, at the Infantry Academy, it will last 5 weeks, and it is attended by 64 Ukrainian soldiers and 3 interpreters. In this course they receive basic training: combat instruction, shooting, first aid. Colonel Izanzo recalled that “the Ukrainians who have arrived here had no prior combat training.”

In parallel, between November 8 and 18, 2022, 21 Ukrainian soldiers have also been instructed in the use of the 105/14 towed howitzer at the Alvarez de Sotomayor Base, in Almería. This training is linked to the delivery of this material by Spain to Ukraine. The course has been led by the I/32 Field Artillery Group, belonging to the 32 Mixed Artillery Regiment (RAMIX 32) of the General Command of Melilla, dependent on the Canary Islands Command. Ukrainians have already returned to their country.