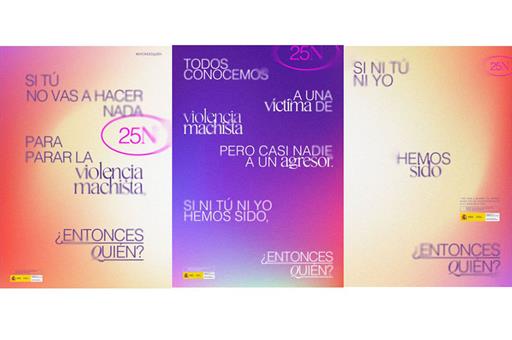 This Friday, November 25 (25N), the institutional act of awarding recognition for the fight against sexist violence will take place, the International Day for the Elimination of Violence against Women.

The Secretary of State for Equality and against Gender Violence, Ángela Rodríguez; and the Government delegate against Gender Violence, Victoria Rosell, have presented the campaign launched by the Ministry of Equality to mark 25N, International Day for the Elimination of Violence against Women, and released the latest data on gender violence in Spain and the 016 service.

The social awareness campaign is addressed, for the first time in 25N, to men through the slogan in the form of a question “So who?”, to question them as the cause of violence against women and, at the same time, as part of essential for the end of this violence.

“This is a campaign that sets a precedent in the type of public policy awareness campaigns against sexist violence that have been carried out in Spain. We have spent decades in which a message has basically been sent to women, that they are necessary, but there was a message floating in the air: What is the role of men in the fight against machismo?”, highlighted the Secretary of State for Equality, Ángela Rodríguez.

The “So Who?” campaign, carried out by the Ogilvy Madrid agency, aims to break the complicity of the gentlemen’s pact, a pact that transcends origins, ideologies, social or generational characteristics and that always needs the complicity of the group for the perpetuation of the privileges. With this, it seeks to question all the men who want to take that step forward and get their involvement, with this text: “We all know a victim of sexist violence, but hardly anyone an aggressor. If neither you nor I have been? So who? If you’re not going to do anything to stop it, then who?”

“We firmly believe that without men we will not be able to put an end to machismo and violence against women. For this reason, in this campaign we wanted to ask a fundamental question: So who?” Rodríguez explained. “The idea is that the issuing subject of this campaign is not the Ministry of Equality, nor the feminists, but rather that they are men speaking to men. A society that does not validate male chauvinists.”

During the appearance before the media, the Government delegate against Gender Violence, has also made known the people, projects and institutions, which this year 2022 have been recognised for their work in different areas in the fight against macho violence. The presentation of these awards will take place this coming Friday, November 25, at 11 a.m. in an institutional ceremony held at the Museo Nacional Centro de Arte Reina Sofía, presented by the journalist and writer Carme Chaparro Martínez.

As a parallel action to the institutional act of 25N, today, Tuesday, November 22, the assembly hall of the Ministry of Equality will host the “Comadres Action”, a feminist action carried out by six women without theatre training who narrate different stories about their experiences and experiences around of a table. The action will be broadcast live through the YouTube channel of the Ministry of Equality.

Victoria Rosell has also presented the data relating to the 016 service and gender violence in Spain. Since last October 10, 2022, the date of her last appearance, until today, the murders of four women victims of gender violence in Spain and the murder of a minor on November 6 in Madrid have been confirmed. In 2022, 38 women have been murdered; 1,171 since 2003. The number of orphaned minors has risen to 26 in 2022, and 365 since 2013; and of minors murdered and murdered by gender violence to 2 in 2022, and 48 since 2013.

Regarding the data related to the 016 service, the number of relevant calls during the month of October was 7,947, which represents an increase of 3.48% compared to October of the previous year. 83.81% of the pertinent calls received in October were related to gender violence and 16.19% related to other forms of violence (the most numerous with 6.68% are physical and psychological violence, both outside the couple or ex-partner as family, followed by those related to family violence with 5.13%).

The number of pertinent online consultations from October 1 to 31, 2022 was 118, of which 86.44% were related to gender violence and 13.56% to other forms of violence, the most numerous being with a 5.93% on physical and psychological violence (outside the partner or ex-partner and within the family).

Through WhatsApp, a total of 473 pertinent inquiries have been received during this month of October 2022. Of these, once again, the consultations related to gender violence represent the majority percentage, 86.05%, and those related to other forms of violence against women, 13.95%, being the most numerous with 5.29 % on family violence, followed by those related to sexual violence with 3.38%.

Likewise, on September 15, 2022, a new communication channel of the 016 service was launched: an online chat available through the website of the Government Delegation against Gender Violence. The number of pertinent inquiries through this channel from October 1 to 31, 2022 was 665, of which 90.23% were related to gender violence and 9.77% to other forms of violence.

Finally, regarding the data from ATENPRO (the Telephone Assistance and Protection Service for Victims of Gender Violence) and devices, the latest data available corresponds to the month of September 2022. During that month, 847 registrations were registered in ATENPRO, with a total of 17,080 active users as of September 30 and the number of active devices at that same date it was 2,980.