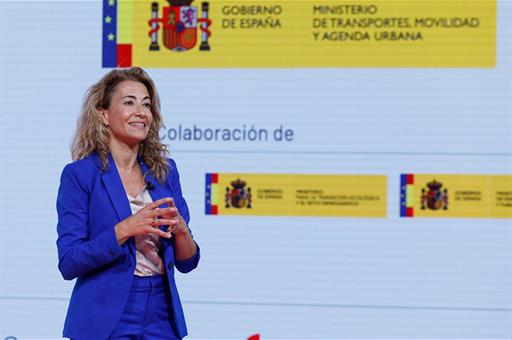 The Minister for Transport, Mobility and the Urban Agenda (Mitma), Raquel Sánchez, has highlighted the success of the liberalisation of high-speed rail in Spain, where three operators already provide service, and has demanded reciprocity in the other countries of the European Union to contribute to expand the market. “We are proud to have established transparent and non-discriminatory conditions for all the agents interested in liberalisation, without preferential treatment,” said the minister at the commissioning ceremony for Iryo, held at the Joaquín Sorolla station in Valencia.

Thus, after the inaugural trip between Madrid and Valencia, the head of Mitma has highlighted that Iryo, together with the French Ouigo and the Spanish Renfe, already compete on equal terms in the Spanish railway system, within the recent liberalisation process undertaken in Spain, which has made the country the first on the continent with three top-level companies providing high-speed services.

In this context, Raquel Sánchez has demanded reciprocity from the rest of the European Union countries when it comes to allowing third-party operators to make liberalisation a global success. “This process requires reciprocity. The competition that we favour here should be common currency throughout the Union. I can only describe as unjustifiable the obstacles to railway liberalisation that we are observing in certain countries”, she asserted.

The liberalisation of the high-speed network has meant, according to the minister, an unprecedented opening that is making the service accessible to all citizens. “Competition has reduced prices and has caused high speed to lose its elitist character, increasing the social profitability of investments and ensuring the right to mobility for all citizens”, she added.

For the head of the Department, the ultimate beneficiary of liberalisation is the sector as a whole, “since competition is being synonymous with innovation, without compromising quality.”

Overall, liberalisation will mean an increase of around 55% in the high-speed supply in the Madrid-Barcelona, ​​Madrid-Levante and Madrid-South corridors.

“In the short term, it will be reflected in demand, with an increase in traffic of around 30% compared to 2019,” said Raquel Sánchez, who has advanced that she hopes that competition will soon enter other axes such as the Madrid-Galicia, the Mediterranean Corridor or Madrid-León-Asturias. “I am confident that they will arouse the same interest among the companies as the lines in which there are already capacity framework agreements,” she assured.

“We understand that the only mode of transport capable of ensuring the sustainability, territorial cohesion and progress of Spain is the railway”, stated Raquel Sánchez, “in it lies the key to the transition towards a new development model with which face the immense challenge of the climate emergency”.

She has also stressed that railway liberalisation is not only allowing passengers lost due to the pandemic to be recovered, but also adding new ones. This transfer of traditional users from other means of transport “also has an environmental and economic repercussion because postponing the private vehicle and the plane in favour of the railway is a victory for sustainability”, the minister pointed out.

The high-speed network in Spain connects 70% of the Spanish population and will exceed 4,000 kilometres before the end of the year, with the commissioning as far as Murcia. With an investment of more than 60 billion euro, it has contributed to the socioeconomic development and territorial structure of the country.

Minister Sánchez has reported that the Department’s estimates are that, between 1992 and 2021, the use of the new high-speed rail network has generated savings of close to 6 billion euro, if its impact is evaluated on climate change, pollution and accidents.

“We are a world power in high speed, but not only in kilometres of track but also in railway and industrial terms. We are also technological leaders in interoperability and in signalling and circulation systems. We enjoy a privileged position to compete in a market where the large international projects are transport projects linked to the development of infrastructures”, concluded the person in charge of Mitma.