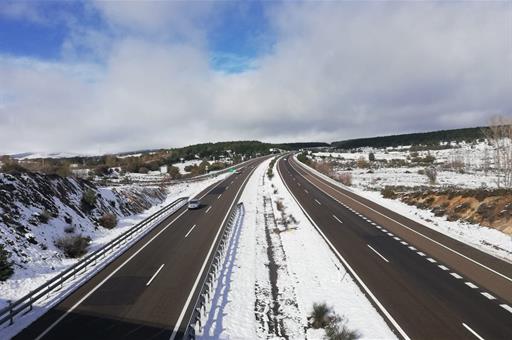 The Ministry of Transport, Mobility and Urban Agenda (Mitma) has deployed 1,471 snowploughs and 250,426 tons of fluxes for the 2022-2023 winter road campaign on the State Highway Network (RCE), for an amount of 66.7 million euro.

Both the snowploughs and the melting media, mainly salt, distributed in 336 warehouses and 585 silos, will be put into operation in adverse weather conditions.

Approximately 3,600 operators are expected to participate in the campaign, adding personnel from Mitma and from highway maintenance and exploitation companies.

The winter road operations pursue, in accordance with the established action protocol, to maintain the roads of the RCE in winter, when they are affected by snow or ice problems, in the best possible conditions of comfort, safety and fluidity, of according to the service levels set for each section of the network.

All the sections of highways of the State Network have a level of service assigned, with priority being given to motorways, as well as those roads with the highest traffic intensity (IMD) and those that serve as access to provincial capitals and populations of more than 20,000 inhabitants.

Within the winter road operations, it is planned to carry out preventive and curative treatments in situations of low temperatures and in case of snowfall on the roads affected by said phenomena.

The main objectives are the prevention of the formation of sheets of ice on the roads when frost is expected, the information to road users of any incident sufficiently in advance and, in the event of snowfall, the removal of snow to minimise the disturbances to traffic as a result of these.

An adequate treatment of winter roads is conditioned by an accurate and known weather forecast well in advance (which is not always possible) and by the conditions in which the snowfall occurs (traffic intensity, peak hours, access to large cities …). For this reason, one of the best measures to adopt is in the hands of the citizens: that they comply with the recommendations made by the authorities in adverse weather conditions.

In line with the 2030 Strategy for Safe, Sustainable and Connected Mobility of Mitma, the State Highway Network accommodates several innovative tools for digitisation and efficient management of winter roads.

This is the case of the “Automated decision support system” (MDSS) implemented in a pilot section of the A-62, in the province of Salamanca, which centralises weather information with the aim of facilitating and optimising treatments for run, both in number and extent; or the “Winter Road Trafficability Index” pilot project, which allows us to understand how usable or passable a point on the network is based on parameters such as traffic, geometry and friction of the pavement, weather conditions, and the application of Big Data technology.