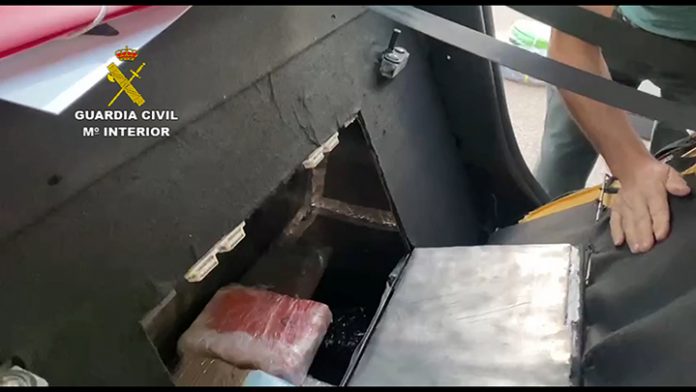 The Guardia Civil has dismantled a criminal organisation dedicated to international drug trafficking, 14 people have been arrested and 9.5 kilograms of cocaine and other narcotics have been seized.

Operation Marcaje began in February of this year with the identification of a vehicle in which the Guardia Civil found a large amount of cash that the driver could not justify its legal origin.

As a result of this location, this operation began, discovering a network dedicated to international drug trafficking. The investigated organisation used heated vehicles to transport drugs and money, even silk-screening them as commercial vehicles.

The members of the network took many security measures to avoid police action, especially when they were transporting drugs or money. These were hidden in double bottoms that they made in their workshop in the Seville town of Tomares.

The alleged perpetrators travelled with screen-printed vehicles from well-known companies, even going so far as to wear the uniforms of their workers to avoid police checks.

The group moved large amounts of drugs from South America, making frequent trips to Colombia and the Dominican Republic to organize shipments.

Once all the members of the organisation and the role that each one of them performed were identified, 12 entries and searches were requested from Seville Investigating Court number 9 in the provinces of Madrid, Ciudad Real, Cádiz and Seville.

In the searches, in which some 200 Guardia Civil agents participated, 9.5 kilograms of cocaine, 935 grams of amphetamine, 555 grams of heroin, 18 grams of methamphetamine, 5 vehicles and 246,000 euro in cash were seized.

For these events, fourteen people have been arrested, nine men and five women, who are charged with the crimes of drug trafficking, identity theft and money laundering.