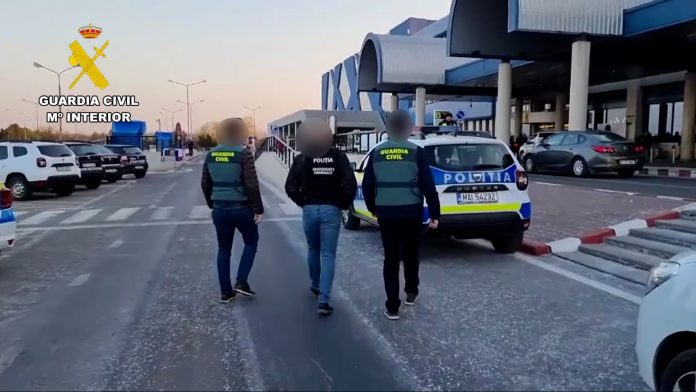 The Guardia Civil of Albacete, within the framework of the AVALON operation, arrested two people as alleged perpetrators of a crime of homicide and another of robbery with violence in an inhabited house, which occurred in the Albacete town of Alborea in the month of November 2014.

Eight years ago, the Guardia Civil learned of the possible homicide of a person, when the relatives of a 70-year-old resident of Alborea began to worry because they had not seen him in the town for a few days. For this reason, one of his nephews entered his home, finding the lifeless body of his uncle lying on the kitchen floor. Once the Guardia Civil agents arrived, they appreciated that the death could have been violent, so the hypothesis of a possible homicide was raised.

For this reason, they began the technical-ocular inspection of the house, which pointed out that the authors had accessed the property with the intention of stealing. On the other hand, in the autopsy carried out on the victim, the forensic doctors of the Institute of Legal Medicine of Albacete appreciated that the body presented multiple traumatisms that constituted the direct cause of death.

As a consequence of the violent death, a complete study of the corpse was carried out, achieving, thanks to the meticulous work of the doctors, finding DNA remains belonging to one of the alleged perpetrators.

Likewise, from the work carried out by the staff of the Criminalistics Service of the Guardia Civil on the samples obtained in the autopsy, it was concluded that these genetic remains coincided with other unidentified remains found in a robbery that occurred inside a home in the town of Teruel.

This line of investigation made it possible to identify a man of Romanian nationality related to the events investigated in Teruel, who had been residing and had ties to the Manchuela region, where the town of Alborea is located, the scene of the murder under investigation.

Given these circumstances, more than 2,000 profiles were analysed in different social networks belonging to the suspect’s family, work and friends circle, managing to narrow down a small group of people as possible participants in the neighbour’s death. The result of this was the identification of another man of Romanian nationality who, based on various indications, could be directly related to the murder under investigation in the absence of verification of genetic data.

Attempts to locate this person led to the discovery that he was possibly living in Romania or Central Europe, so they had to look for alternatives to obtain a biological sample. Thus, the development of the investigation located a genetic sample of the suspect located in a blood bank of the health services of the Valencian Community. After obtaining the mandatory judicial authorisation, the blood sample was compared with the genetics found in the victim’s lifeless body, finally matching.

Having identified the person to whom the genetic remains extracted from the victim’s body corresponded, the Judicial Authority issued a European arrest and surrender order and the international search was activated.

After the issuance of this order, it was possible to determine that the suspect was in Romania, for which reason the Interior Attaché Office of the Spanish Embassy in Romania carried out intensive negotiations with the Central Unit of Fugitives of the Romanian Police, obtaining their location and detention.

In addition, these collaboration efforts made it possible for Guardia Civil officers to travel from Spain to Bucharest to continue the investigations.

Once this first detainee was arrested and extradited to Spanish national territory, it was possible to corroborate his participation in the investigated homicide and new evidence was obtained regarding the participation of the first suspect charged in the proceedings, on whom, in addition, other incriminating data fell. As a consequence of this and given that he was on the run and whereabouts unknown, the judicial authority issued an international arrest warrant that generated an international signalling of the so-called “Red Notice”, through Interpol, as a person wanted for his involvement in serious crimes.

In the same way as in the previous case, the issuance of this international search warrant made it possible to determine its possible location in English territory, for which reason the Interior Attaché Office of the Embassy of Spain in the United Kingdom was able to establish a search device, together with the National Crime Agency “NCA”, which quickly found the whereabouts of the fugitive, who was arrested and later transferred to Spanish territory by “Interpol” agents.

With the availability of both required before the Spanish judicial authorities, the investigators have closed an investigation of more than seven years in which a serious crime of homicide that shocked the small town of Albacete in Albacete has been fully clarified.

In the different phases of the AVALON operation, directed by the Area of ​​Crimes Against Persons, of the Organic Unit of the Judicial Police of the Albacete Command, they have had the intervention of numerous services, including the Department of Biology of the Criminalistics Service in terms of functions related to genetic analysis. There has also been the collaboration of agents from the Teruel National Police Station in the exchange of information and the collaboration provided by the Interior Attaché Offices of the Spanish Embassies in Romania and the United Kingdom stands out, who after requests for the Technical Unit of the Judicial Police of the Armed Institute have completed the connections with the “Politía Criminale” of the Romanian country, as well as the English National Crime Agency “NCA”,

The proceedings carried out by the Guardia Civil were placed at the disposal of the Investigating Court of the Albacete town of Casas Ibáñez, decreeing provisional detention communicated and without bail for the two detainees.