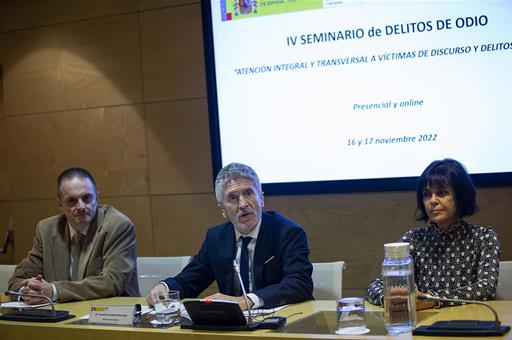 The Minister of the Interior, Fernando Grande-Marlaska, has inaugurated the IV Seminar on Hate Crimes, a training and awareness-raising activity organised by the National Office for the Fight against Hate Crimes and aimed at members of the State Security Forces and Corps, to whose attendees he has insisted that “the fight against hate crimes and against discrimination in our society cannot know rest.”

This IV Seminar on Hate Crimes is a training and awareness-raising activity organized by the National Office for the Fight against Hate Crimes of the Ministry of the Interior, which is attended, in person or online, by members of the National Police, Guardia Civil, Mossos d’Esquadra, Ertzaintza, Foral Police of Navarra, General Corps of the Canary Islands Police and various local police forces.

In his inaugural speech, Grande-Marlaska reminded them that “for the Ministry of the Interior, for the Government of Spain, eradicating hatred from our ways of socio-political coexistence is a priority objective”.

The Minister of the Interior has shown his confidence that the seminar will be a useful activity to deepen knowledge of hate crimes and hate speech, to improve police prevention and investigation mechanisms and to generate proper care for victims of this typology criminal.

“We must be able to deploy an effective protective network for those who suffer a hate attack, we must get them to place their trust in us, we must reduce the high level of underreporting that we know characterises this type of crime”, Grande-Marlaska told the attendees.

This fourth seminar is entitled ‘Comprehensive and transversal care for victims of hate speech and crimes’, which is one of the central axes of action that articulate the II Action Plan to Fight Hate Crimes 2022-2024 promoted since April by the Ministry.

The session addressed topics such as the removal of online content as a protection measure for victims, the role of victim care and assistance offices or intervention with minors involved in hate incidents.

Among the experts were magistrate Alejandra Frías, director of the Studies and Reports Service of the General Council of the Judiciary; Nicolás Marugán, deputy director general for Equal Treatment and Ethnic-Racial Diversity of the Ministry of Equality, or Javier Urra, forensic psychologist member of the Spanish Academy of Psychology.

Today, Thursday, work sessions focus on areas such as hate speech as a prelude to crime or the possible disorders and consequences that hate incidents can cause in their most vulnerable victims.

Some of the specialists who will speak on these areas of work on Thursday are Rafaela Santos, president of the Spanish Society of Post-Traumatic Stress Specialists; Esteban Ibarra, member of the Council of Victims of Hate Crimes and Discrimination (COVIDOD) and president of the Movement against Intolerance, or Tomasz Filipiak, coordinator of Attention to Victims of Hate Crimes of the Organisation for Security and Cooperation in Europe (OSCE/ODIHR).