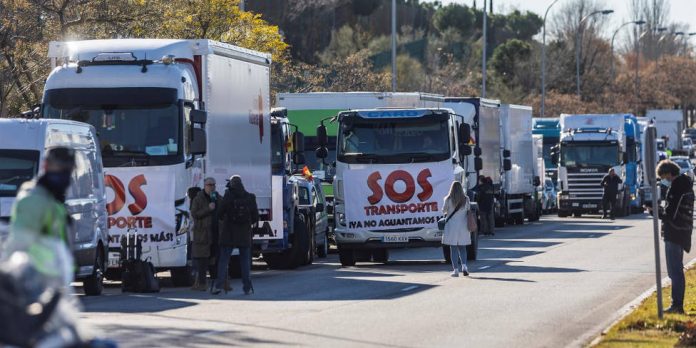 Lacking the support of many drivers and operators in the sector, the indefinite strike by road hauliers which began on Monday, was suspended on Tuesday evening.

Plataforma en Defensa del Transporte, the association of companies and self-employed carriers that called the indefinite strike in March, called for renewed strike action this week, to continue indefinitely.

On both Monday and Tuesday, the effects of the strike were minimal, after the majority of workers failed to support the action, some, such as the Valencia region’s representatives, saying it would be unfair to inflict such damage on the public. As such, there were no effects on the supply chain, except for some sporadic violent acts of burning or puncturing tires.

The majority unions, UGT and CC.OO., have not supported the call, nor has the National Committee for Road Transport (CNTC), the body that brings together transport business associations with the Government.

The organising platform do not blame the lack of support on the termination of the industrial action, rather the “manipulation, lack of freedom and the destructive machinery towards everything that does not agree with this rotten and corrupt system”, as the reason for suspending the strike so as not to expose its members to this scenario.

The platform argues that “a relentless campaign of harassment and demolition has been carried out by shippers, CNTC associations, government unions, some media and a specific political party, to intentionally try to discredit everything possible”.

In the press conference after the Council of Ministers, the Minister of Territorial Policy and Government spokesperson, Isabel Rodríguez, celebrated this call, thanking the sector as a whole for having wanted to work in recent days.

“The Government recognises everyone’s effort to collaborate and start a dialogue with a sector that is suffering from the consequences of the crisis and to which many resources have been made available, specifically 1,4 billion euro in fuel discounts and direct aid,” Rodriguez added.