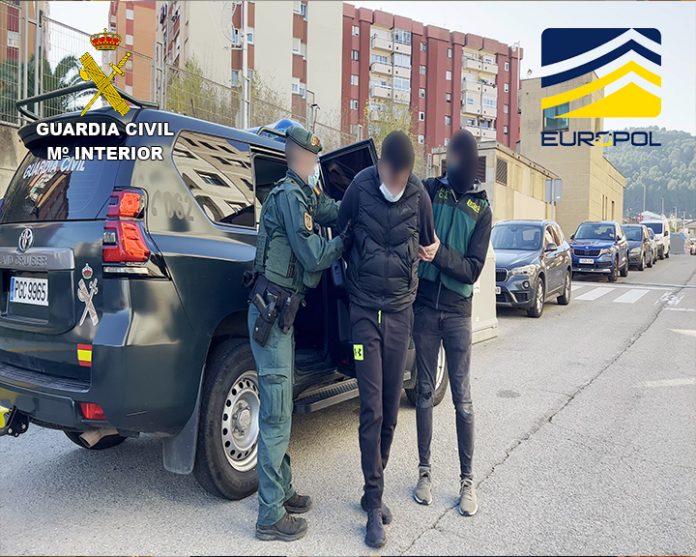 The Guardia Civil, in a second phase of what was called operation MVRAND, carried out in December 2021 and in which one of the most wanted drug traffickers at the international level, FAA, a Moroccan citizen considered “High Value Target” was arrested for the main international police agencies, arrested another 10 people directly related to the organisation he led and with the introduction of large shipments of cocaine and hashish both in Spain and in different European countries.

On this occasion, actions have been carried out in cities such as Barcelona, ​​Almería, Ceuta and Málaga, the latter being where the Moroccan citizen AA, right-hand man of the leader of this criminal group, has been arrested.

Both individuals are natives of the Moroccan coastal city of Al Hoceima, where they have known each other since childhood, beginning together with the arts of fishing and navigation, until they became over the years the largest known suppliers of hashish. In the last months of 2021, it has been verified how they supplied more than 100 tons of hashish to different criminal organisations that operated in Spain.

As far as logistics are concerned, they imported the drug boats and the high-power/displacement engines clandestinely from the Netherlands, introducing both in warehouses near the coast of Portugal, where they fine-tuned said vessels and activated them in the different routes of entry of narcotic substance. These boats were intended to spend several months sailing, carrying out continuous collection of drugs in Morocco to later carry out transfers or introduce them on the Spanish coast.

This criminal group had a solid infrastructure in Dubai, the place from where all the activities of its economic network were directed. As an example, it has been corroborated how they sent “mules” from that Emirate transporting watches of great economic value to Spain, the investigators having seized several of these pieces, some of them collector’s items and whose market value would reach prices higher than the €800,000.

In the same way, they would also have acquired several luxury yachts using this complex network of money laundering, even using companies based in countries such as the United Kingdom, Belgium, Germany, France, Italy, Ireland or Turkey. In this sense, a holding company has been charged for these events, which had not implemented any protocol, as a subject obliged to do so, to prevent the introduction of profits from drug trafficking in the legal economic circuit.

The support of EUROPOL through its Centre Against Economic and Financial Crime (EFECC), both at an operational and technical level, as well as that of the US Drug Enforcement Agency (DEA), has been decisive for the success of the operation.

Both these agencies, as well as the Guardia Civil as a result of the intelligence obtained from the Special Security Plan for the Campo de Gibraltar (Carteia Plan), have considered FAA to date, as the largest supplier of narcotic substances to different European criminal groups across the Iberian Peninsula, as in the case of our country to the well-known Clan de los Castaña.

The investigation began at the beginning of 2020 by the Central Anti-Drug Group of the Central Operational Unit and has been developed in coordination with the Delegate Anti-Drug Prosecutor’s Office of Campo de Gibraltar and directed by the Mixed Investigation Court number 2 of San Roque (Cádiz) , focusing all its efforts over the last two years on completely dismantling the structure of this criminal organization, in order to cut off the flow and supply of hashish to the main clans operating in Spain.