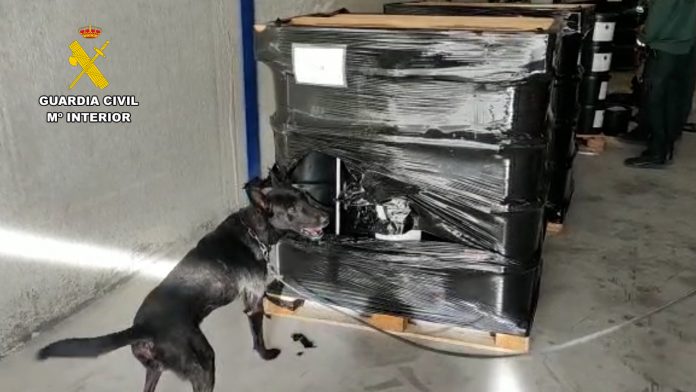 The Guardia Civil, within the framework of the Cesko operation, has dismantled a marijuana storage and distribution centre destined for Central European countries in a warehouse in an industrial estate in Cijuela (Granada). The drug was hidden between drums of liquid asphalt.

During the exploitation phase, two individuals, one of Czech nationality and the other of Dutch nationality, have been arrested as perpetrators of a crime against public health for drug trafficking.

The Organised Crime and Anti-Drug Team of the Organic Unit of the Judicial Police of the Guardia Civil of Granada has seized 170 kilos of packaged and vacuum-packed marijuana that was hidden in drums filled with sand among a shipment of drums of liquid asphalt, as well as a truck with a semi-trailer, computer equipment, mobile telephony and documentation.

The investigators discovered how several individuals stored small amounts of marijuana in a warehouse in an industrial estate in Cijuela.

The Guardia Civil deployed a device around the warehouse in which an agent from the Cinological service (dogs) also participated with an anti-drug dog. Inside the ship, they surprised two individuals loading pallets loaded with drums of liquid asphalt, the loading was stopped and the dog was able to tell the humans which pallets contained drugs. The agents later located one by one the drums that contained the bags of marijuana.

This is the third centre for the storage and distribution of marijuana destined abroad that the Guardia Civil dismantles in an industrial estate in the town of Cijuela this year.

The first action took place last March, specifically on the 29th, when the Guardia Civil dismantled a criminal group dedicated to international marijuana trafficking with the arrest of two; and seized 88 kilos of marijuana hidden between cans of peaches in syrup.

The second action took place last July, when a criminal group that was surprised by the Guardia Civil was dismantled when they were loading a truck with 212 kilos of marijuana hidden among a shipment of garlic.