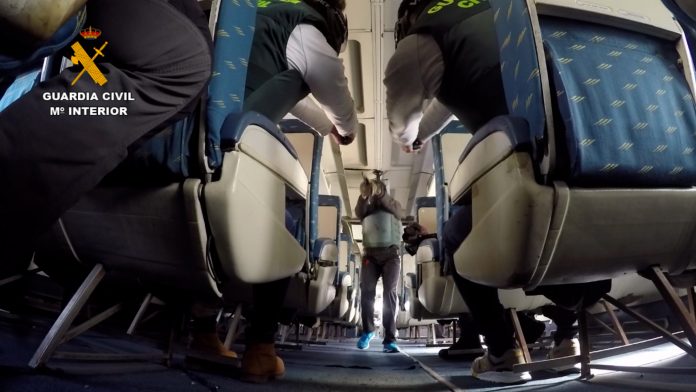 The Guardia Civil has presented the National Flight Security Escort Unit (UNESEV), internationally known as Air Marshalls, which has previously carried out several flights and will deploy all capacities in the country in Spanish aircraft, both on domestic and international flights, with the in order to give a police response in case of threats.

The UNESEV has been presented on the occasion of the meeting of the International Committee of Flight Safety Agents, which is being held in Palma de Mallorca, under the Canadian presidency of the committee, the delegations of Germany, Australia, Austria, Holland, India, Israel, Czech Republic, Romania, Singapore, Switzerland, Vietnam and Spain. In the Committee, they will address and debate, among others, issues related to intelligence, interoperability, detection of abnormal behaviour and treatment of conflicting passengers.

On the occasion of the last NATO summit, the creation of the UNESEV (Unidad Nacional de Escoltas de Seguridad en Vuelo de la Guardia Civil) was established, which, for the first time in Spain, has deployed this police capacity in Spanish aircraft.

It should be noted that the training of the Flight Safety Escorts (ESV), requires great specialisation and includes, in addition to a very good preparation in personal defence, a demanding training in operational intervention tactics, as well as solid knowledge of the aeronautical environment, of behaviour analysis, negotiation, first aid and a good level of English.

In the European context, the Prüm Convention regulates the ESV figure; It also establishes the need to designate a National Contact Point. In Spain, in its capacity as responsible for both arms control and airport custody, the Guardia Civil has been acting since 2004 as the National Contact Point for these tasks.

In this regard, it should be noted that over the last five years the Guardia Civil airport units at the Madrid and Barcelona airports have coordinated and received an average of 7,500 ESV.

In July of this year, the International Committee of Flight Safety Agents (IIFSOC) unanimously approved the Spanish candidacy, presented in Sydney a month earlier, and the UNESEV of the Guardia Civil became part of that forum.

On the occasion of the celebration of the autumn meeting of the IIFSOC in Palma de Mallorca, it consolidates the Guardia Civil as a member of reference in that international committee. For three days, the delegations from Canada, Germany, Australia, Austria, the Netherlands, India, Israel, the Czech Republic, Romania, Singapore, Switzerland, Vietnam and Spain, represented by the UNESEV of the Guardia Civil, will address and debate, among others, issues related to intelligence, interoperability, detection of anomalous behaviour and treatment of conflicting passengers.

During the inauguration of this meeting in Palma de Mallorca, the Government Delegate in the Balearic Islands, Aina Calvo, stressed that greater security on flights arriving and departing from the islands will result in a better service for tourists who each year decide visit us from all corners of the world.

For his part, the Guardia Civil’s Deputy Director of Operations, Lieutenant General Pablo Salas, has indicated that the Guardia Civil’s National Flight Safety Escort Unit constitutes the culmination of a demanding training process that has allowed us, for the first time in Spain, provide flight safety services on national flag aircraft, both on domestic and international routes.