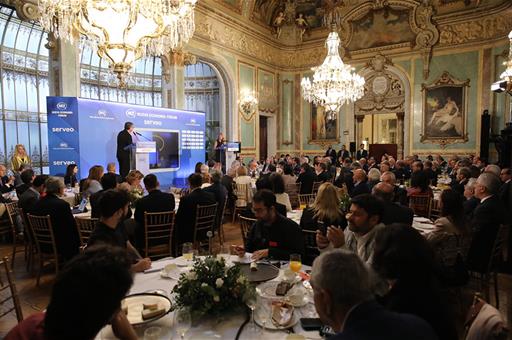 The Minister of Transport, Mobility and Urban Agenda has celebrated the good reception of the free season tickets for Cercanías, Rodalies and conventional Media Distancia train services, as operator Renfe has now issued 1.5 million tickets throughout Spain, and it is expected to reach two million tickets before the end of the year.

“The Ministry has not been left behind and has taken measures in the face of the crisis and the rise in prices due to the invasion of Ukraine. Measures that are reaching people, such as cheaper and free public transport, which allows significant savings to thousands of families and a great environmental improvement”, assured the minister during her speech at the informative breakfast New Economy Forum in Madrid.

In this sense, she explained that during the month of September commuter trips have increased by more than 24% compared to last year and in conventional Media Distancia by more than 40%, taking into account the changes in habits of mobility due to the increase in teleworking after the pandemic.

“If we combine this with the data on the decrease in traffic at the accesses to the cities, we see how the measure works. We hope to continue gaining supporters, that definitive changes will be produced in our mobility habits that will help us in the fight against climate change” Raquel Sánchez has assured. Not in vain, train users will save 118 million litres of motor fuel and avoid the emission of 360,576 tons of CO2 into the atmosphere between September 1 and December 31, 2022, the period of validity of the aid, compared to if they opted for the private vehicle to get around.

The measures to facilitate the use of public transport and alleviate the pockets of regular travellers are not limited to Renfe services. The department headed by Raquel Sánchez has approved aid to finance 50% discounts on multi-trip tickets for state concession bus lines, of which some 75,000 tickets have already been sold. Likewise, the Ministry of Transport, Mobility and Urban Agenda (Mitma) is going to transfer funds to 186 local entities and the autonomous communities to finance the 30% discounts on multi-trip transport tickets. Percentage that rises in the case of multimodal subscriptions that include Cercanías services.

As the minister stressed during her speech, sustainability is a priority for the Government in general and for the Ministry she directs in particular, which is also reflected in the Recovery, Transformation and Resilience Plan (PRTR). And it is that, as she has assured, of Mitma’s investments within the framework of this Plan, around 75% have a high environmental component. “With them we will achieve a 35% reduction in private traffic in low-emission zones and an average reduction in non-renewable primary energy consumption of over 40% in building refurbishment”, she underlined.

As it has influenced, one of the main tools in the ecological transformation and reduction of emissions is the railway, since it is the most sustainable mode of transport. Specifically, she has emphasised the 6,2 billion of the Recovery Plan for this mode of transport, with the Cercanías in the lead as the most used rail service. As she has stated, the investments of 1,6 billion in Cercanías included in the PRTR will contribute to achieving the objective set by Europe of reducing greenhouse gas emissions by 55% by 2030, compared to 1990.

The commitment of the Recovery Plan and the Ministry to sustainability in transport goes beyond investment in infrastructure or transformation of fleets. Thus, it has announced that its department has published in the BOE the first call for aid for training courses in digital skills and sustainability in the field of transport, mobility, logistics and infrastructure. The call is aimed at public and private universities and has 10.5 million euro from NextGenerationEU European funds to train 3,945 students before June 30, 2025.

As she explained, this first call is part of a program endowed with 33 million euro, with which it is sought that up to 11,835 people achieve high training in sustainability and digitisation of transport and mobility before December 31, 2025. In In some cases, the entire training will be subsidised.

“We rely on the Plan to defend one of the most relevant sectors of our economy and its workers, transport. There is no progress if there is no training and, therefore, we want it to be accessible to all professionals.”, she argued.

At this point, she recalled that the Department works to protect carriers, for which a new tranche of aid of 450 million euro was enabled to compensate for the rise in fuel prices, whose deadline to request them closed last Friday. “The speed of our response is very important, and we are seeing it reflected in the improvement in economic data”, assured Raquel Sánchez.

In this context, the minister recalled that the fight against climate change also involves transforming the mobility of cities, making it green, social, human, digital and territorially balanced. According to her, she added, the Mobility Law has initiated this transformation and the Recovery Plan has deployed a wide range of investments and measures in this area.

Specifically, the head of Mitma has referred to the promotion of public transport that the Ministry is promoting together with autonomous communities and municipalities, as well as aid for low-emission zones and the transformation of public transport, included in the PRTR. “They allow us to transform the movement in our cities, promoting active and sustainable mobility, and betting on cleaner modes such as bicycles and collective transport”, she argued.

In this context, she recalled that last Thursday the second call for aid was closed for municipalities with more than 20,000 inhabitants to implement these low-emission zones and promote the sustainable and digital transformation of collective public transport. As it has been advanced, this call for 2022, which has an initial budget of 500 million euros, has been very well received, since 188 municipalities, where nearly 24.2 million inhabitants reside, have requested aid for more than 730 million euro to finance 678 actions aimed at, for example, the acquisition of electric buses, the construction of separate bike lanes, the pedestrianisation of streets, the deployment of limited parking areas, etc.

The minister recalled that the first call was also a success, amounting to 1 billion thanks to which 171 municipalities have obtained European funds to carry out projects that improve air quality and develop healthier mobility. As she has declared, within the framework of this first call, more than 80% of the projects are being carried out: 521 actions in progress and 11 already completed.

The head of the Department, who has insisted on the Government’s commitment to a humane and sustainable city model, has also claimed the role of housing and rehabilitation for this objective. Thus, she has recalled the Government’s promotion of the Law for the Right to Housing, as well as the 6,8 billion dedicated to this area in the Recovery Plan, of which more than half have already been transferred to the autonomous communities. Thanks to this allocation, 80% of households can now request aid, Raquel Sánchez has celebrated.

For example, home renovations that involve a 7% reduction in energy consumption can be financed up to 40% of their cost.

With these funds, the aim is to contribute to the objective of rehabilitating 1.2 million homes by 2030, which will mean primary energy savings equivalent to 23% of the savings of the Energy and Climate Plan. “It is an opportunity that allows us to fight against the energy crisis and the climate emergency, while protecting the most vulnerable”, she said.

The minister has defended the action of the Government, which has not stopped promoting aid for those who need it most and for the most vulnerable in the current context of the crisis in Ukraine. “Our only objective is to reach all corners, help those who need it most in this difficult situation”, she added, before recalling that, soon, the Executive will approve the Contingency Plan to combat the consequences of the war.

She also recalled the 11 billion mobilised from the Recovery Plan; almost 4,7 invested by the Ministry in the first half of this year; as well as tenders over 31 billion since June 2018.