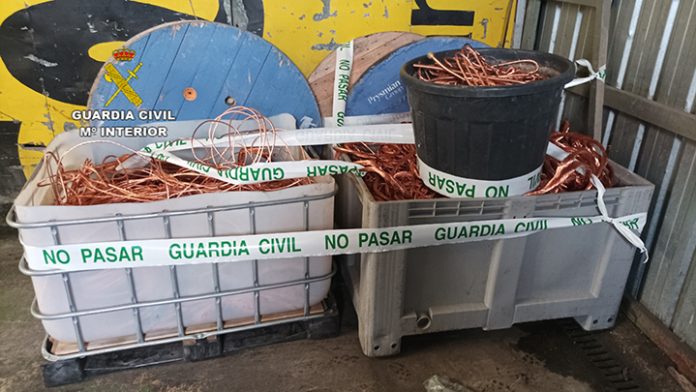 The Guardia Civil, within the framework of the “SODIA” operation, carried out in the province of Cuenca, has proceeded to arrest 12 people and has investigated another 3, belonging to a criminal organisation suspected of being responsible for the theft of more than 15 tons of copper cable in the provinces of Cuenca, Teruel, Zaragoza, Albacete and Madrid.

In the operation, nearly a ton of stolen cable has been seized, approximately 2,000 euro in cash, items for camouflage and theft, several mobile phone terminals, documentation related to economic benefits, as well as the seizure of four high-end vehicles.

The operation began in December of last year, when the Guardia Civil learned of the theft of coils of copper cable, mainly from photovoltaic solar panel installations in La Manchuela, Cuenca.

Continuing with the investigations, the agents were able to verify how a series of coordinated people went to places previously established as meeting places to, later, undertake a trip to facilities likely to have specific material, such as coils of copper cable, in order to commit the theft.

To do this, they used industrial vehicles similar to those used by labour contracts, or they camouflaged themselves with the workers’ own clothing. Likewise, they previously studied the place where they were going to act, manipulate and drive the vehicles of the works, etc.

All this meant a very complex investigation for the agents when it came to controlling the activities and movements of this group of people and discovering the places where the stolen material was introduced, to later pass it off as waste objects and obtain an economic benefit.

Once the alleged perpetrators of the thefts were located, the operation was carried out by carrying out four searches simultaneously in the towns of the province of Madrid: Getafe, Móstoles and San Fernando de Henares, as well as an inspection at a recovery centre located in the east of Madrid.

As a result of this, 12 people were arrested for the crimes of robbery with force, theft of copper material, membership and integration in a criminal group, money laundering and simulation of crime, in addition, another 3 were investigated.