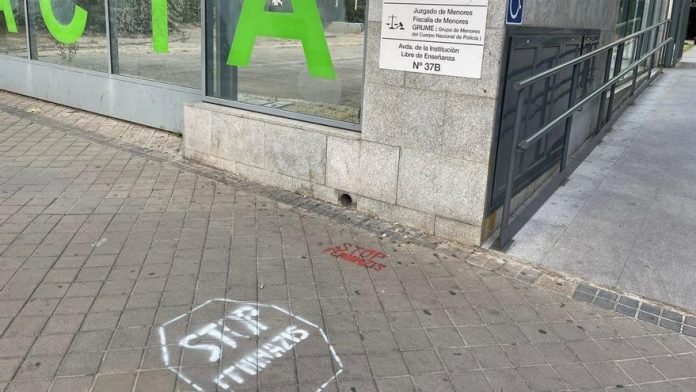 The area surrounding the Courts of Violence against Women in Madrid were covered with posters hanging on traffic lights and lampposts, and printed on the pavements, which describe these courts as “feminazis” and alluded to false complaints.

The situation was reported by the Socialist Group in the Madrid City Council, which is directed by Mar Espinar.

According to the Madrid socialists, the posters were quickly removed from the area, thanks to urgent action from the cleaning services of the Madrid City Council, who were alerted by residents in the area.

From the PSOE, the Councillor for Equality and Social Services, Emilia Martínez Garrido, has strongly condemned “this further example of violence against women” while regretting that “these events happen” because she believes that “it is no stranger to tolerance and the permissiveness of the Government of the City Council of the Partido Popular and Ciudadanos with the denial positions of gender violence of the extreme right of Vox, since anti-feminism is the hallmark of the extreme right”.

Vox, in fact, has already announced that it will eliminate the law that protects women from sexist violence and that it will promote an alternative norm of “domestic violence”, as it is already doing where it governs with the PP, such as in Castilla y León.