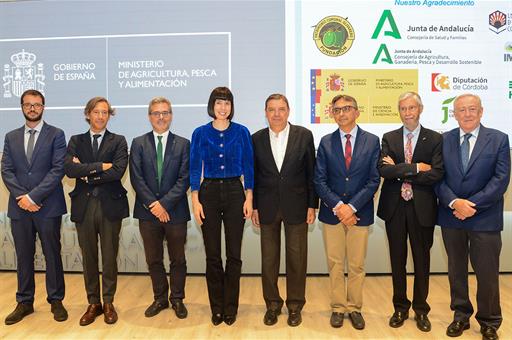 The Minister of Agriculture, Fisheries and Food, Luis Planas, has also praised scientific studies, such as the CordioPrev report, because it forms a “perfect triangle: agriculture and food, science and health”.

This was revealed during his speech, together with the Minister of Science and Innovation, Diana Morant, at the presentation of the results of the CordioPrev study, which has shown, for the first time, that the Mediterranean diet, whose main oil is olive oil, prevents the recurrence of cardiovascular accidents. The minister highlighted that, thanks to these results, “we can improve the life expectancies of many people who have already suffered a coronary accident”.

In this sense, Planas has reiterated the importance of scientific studies demonstrating more and more the healthy benefits of olive oil, so that in the future the packaging may have some type of indication of its nutritional values, in accordance with the strict European labelling regulations.

Luis Planas has advanced that one of the great objectives that the Ministry of Agriculture, Fisheries and Food has set itself when Spain holds the presidency of the European Union, in the second half of 2023, is to discuss the new proposal of the European Commission in matter of food labelling, and has assured that “we will work so that olive oil comes out in the place it deserves”.

The Minister of Science and Innovation has assured that this study symbolises the characteristics of “science as a common good for society”. Diana Morant explained that this research has required time and investment to bear fruit, as the best science needs.

For 7 years, more than 1,000 patients and dozens of researchers have participated. To make this possible, Morant stressed that the Ministry of Science and Innovation, through the Carlos III Health Institute, has allocated 3.1 million euro and has approved 12 projects and 5 research contracts.

For his part, Minister Planas congratulated the entire research team for this work and thanked the generosity and effort of the patients who have participated in this research on a voluntary basis, and have had to adjust to certain dietary patterns.

For Planas, this effort has been worthwhile due to the valuable knowledge they provide to the whole of society, above all, on a subject as essential as food, which is a daily need for all human beings and which determines, to a great extent, your health and wellness.

This new work complements the results of the PrediMed study, and adds even more scientific evidence on the benefits of the Mediterranean diet for health, especially the consumption of varied and healthy foods combined with an active life.

Luis Planas has assured that Spain has great potential to be at the forefront of European R&D&i in healthy eating, as it has a “powerful and diverse agri-food sector” and a group of knowledge agents, research groups and specialized companies already working in this field.

He recalled that Spain plays a very prominent role in food production on a European and global scale as it is the fourth largest exporter of agri-food products in the European Union and the seventh in the world. For this reason, he stressed that we must continue working so that food and beverages are not only produced in a profitable and sustainable way, but also contribute to improving the health of the people who consume them.

He also stated that the current food price situation affects everyone and, especially, the most vulnerable families. The minister has appealed for an effort to be made so that everyone can have access to diverse, quality food at reasonable prices, allowing all families to have a varied and healthy diet.

Minister Planas has highlighted that the Mediterranean diet, recognised in 2010 as Intangible Cultural Heritage of Humanity by UNESCO, must be preserved, disseminated and promoted. Likewise, he has pointed out that it must be “adapted to the needs and demands of today’s society”, which has less time to prepare dishes and to consume them, and which has more meals outside the home.

Along these lines, the Ministry of Agriculture, Fisheries and Food carries out a series of actions such as the promotion strategy #AlimentosdEspaña, the European program for fruit, vegetables and milk in schools, which allows products such as olive oil to be included in accompanying measures. made of olives; and grants aid to the Mediterranean Diet Foundation for the organisation of congresses and training activities or the production of informative materials.