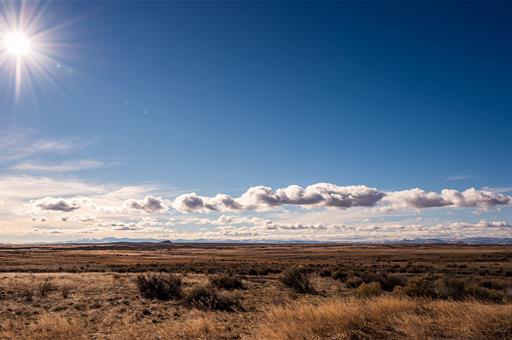 The Vice President and Minister for the Ecological Transition and the Demographic Challenge, Teresa Ribera, has presented the climate balance for summer 2022 prepared by the State Meteorological Agency (AEMET).

The study warns that the trend of warmer temperatures will continue through the autumn. At the meeting, held at the Agency’s headquarters, the vice president stated that “climate change is already putting pressure on us, with immediate, daily and high-impact consequences that require new measures to strengthen our resilience”.

In its balance, AEMET highlights that the average temperature for the quarter made up of June, July and August 2022 was 24ºC, that is, 2.2ºC higher than the normal average. It was an extremely hot summer, the one with the highest average temperature in the historical series, exceeding that of 2003 by 0.4ºC, the warmest to date.

The extremely hot character of the summer occupied practically all of peninsular Spain, with the exception of the coast of Galicia and Asturias, the western end of Andalusia and some other isolated points, where it had a very hot character. In the Balearic Islands, it was extremely hot in Mallorca and very hot in the rest of the islands, while in the Canary Islands it was very hot as a whole.

Three heat waves were recorded during the summer. The first of them, between June 12 and 18, was the second earliest since there are records. The second, between July 9 and 26, was extraordinary in terms of duration (with eighteen days, it was the second longest in the series) and extension (it affected 43 provinces, a historical maximum). In addition, it was the most intense heat wave of all those recorded in Spain, surpassing that of August 2021, which held the record until now. The third heat wave, which took place between July 30 and August 15, was the third longest, with seventeen days. In total, Spain was under a heat wave for 42 days, that is, practically half of the summer, far exceeding the previous record of 29 days, which occurred in 2015.

In addition to the heat, rainfall was scarce, especially in June and July, since both months were very dry. August reached a value close to the normal average in terms of rainfall, although these were mostly stormy in nature. Very adverse meteorological phenomena associated with storms were recorded, such as the large hailstorm recorded in Catalonia at the end of August and the hot outbursts in the Valencian Community in the middle of that same month. As a whole, the summer had a very dry character, with 48 litres per square metre accumulated in the whole of Spain, which is a value 35% lower than the normal average. In the Balearic Islands it was a dry summer and in the Canary Islands, the little rainfall that was recorded gave the summer a very humid character,

With this situation, Spain as a whole ended the summer in a meteorological drought, a situation in which it has remained since January 2022, and which is more intense in areas of the western and interior third of the northern half of the peninsula. The current hydrological year, which began on October 1, 2021 and will end on September 30, is being very dry: with rainfall currently 25% less than the normal value, it is likely that it will end up being among one of the three most dried from the historical series when it ends.

Although the strictly meteorological summer includes the months of June, July and August, in Spain a lengthening of summers is being observed to the detriment of autumn and, especially, spring. It is estimated that, since the 1980s, summers have lengthened ten days per decade. In this sense, it should be noted that this circumstance has been very present in 2022, with a very warm month of May and very little rainfall. May was warmer than about 16% of the months of June since the 1960s and it reached over 40ºC in points in the south of the Peninsula.

At the same time, September began with very high temperatures, also above 40ºC in the Guadalquivir valley and close to that figure in points of the eastern Cantabrian Sea. Temperature records have been broken for the month of September, especially at night, very high especially in the Mediterranean area, but also in the Bay of Biscay: Menorca and the San Sebastián airport experienced their warmest morning on September 14 since there are records not only for September, but for the entire year.

The surface temperature of the water in the Balearic Sea has been at values ​​higher than normal continuously since the beginning of May, and since the first week of July, also continuously, it has recorded temperatures that are 5% of the highest of the historical series, reaching an average value above 29ºC in mid-August, an absolute record.

It is a proven fact that greenhouse gas emissions are causing an increase in global temperatures. In Spain, this warming is estimated at around 1.4ºC since the 1950s. Although the spatial and temporal variability in terms of rainfall is very large, rainfall in the country as a whole has decreased by around 12% in the same period. This clear increase in temperatures and a slight decrease in rainfall has resulted in an extension of arid climates in our country. It is estimated that, since the mid-20th century, arid-type climates have doubled in size in Spain, advancing at a rate of more than 1,500 km² per year. This means that, every five years, an area equivalent to that of the province of Malaga acquires an arid climate in the country, to the detriment of temperate climates. Arid climates are related to a lower availability of water for plants as a result of greater evaporation due to high temperatures and less contribution from scarcer rainfall.

The hottest summer in Europe

Globally, June, July and August have been the third warmest months while in Europe, June has been the second, July the sixth and August the warmest of their respective monthly series. The past weather station has been the hottest in Europe, England and eastern China.

In July, a heat wave situation was experienced in western Europe that particularly affected Portugal, western France, Ireland, England and Spain. The main impact in our country of the high temperatures of the past quarter was an increase in mortality estimated, according to the Daily Mortality Monitoring System (monMo), in 4,663 people.

In relation to water availability, at the end of August a large part of the European continent was in a situation of meteorological drought based on the definition of the Standardised Precipitation and Evapotranspiration Index (SPEI) at 12 months. The SPEI is an extension of the Standardised Precipitation Index (SPI) that takes into account potential evapotranspiration and captures the main impact of rising temperatures on water demand. Likewise, the Copernicus European Drought Observatory indicated that, at the end of August, 25% of the European territory was on alert for this cause.

Another noteworthy fact affected the cryosphere and, specifically, the Antarctic sea ice cover, which in June and July reached the smallest extension of its monthly series and the second smallest extension in August in 44 years of satellite monitoring.

The global review ends with a brief overview of the most notable records, ephemeris or events achieved during the past quarter in the world. Thus, for example, in June and July, heat waves raised for the first time in Japan and England, respectively, the thermometers above 40ºC, or in August there were major floods in Pakistan that caused 1,300 deaths.

Southwestern Europe is becoming a particularly vulnerable area in relation to heat waves that are increasing 3-4 times faster than the rest of the mid-latitude areas. This is the main conclusion of a study, published in the journal Nature, which explains that this increase is motivated, in part, by climate change, which favours an increase in blockade situations, similar to the one experienced this summer, which in many cases lead to heat wave situations.

We will continue with more heat than usual

The autumn of 2022, which will begin in the northern hemisphere on September 23 at 3 hours and 4 minutes official peninsular time, will be warmer than usual throughout Spain, and more robustly on the Mediterranean slope and the Balearic Islands; There is also a greater probability that it rains less than usual in the northwest of the peninsula, considering the reference period 1981-2010.

A very brief preview of the winter quarter (December 2022 and January and February 2023) confirms that it will once again be warmer than normal, especially in the Mediterranean and in northern and eastern Europe. In relation to precipitation, it is not ruled out, although the probability is not excessively high, that it will be rainier than usual in areas of the western Mediterranean and in the continental north, and drier than usual in the eastern Mediterranean.

Important NOTE: In September 2020, the average values ​​in the Spanish peninsular territory of the monthly and annual temperature and precipitation grids described in technical notes 31 and 32 of AEMET (reference period: 1981-2010). This change in methodology may lead to significant differences with the results obtained from the previously used reference values.

NOTE: The data used to prepare this climatological advance is provisional and is subject to subsequent validation.

The information is kindly provided and copyrighted by AEMET.