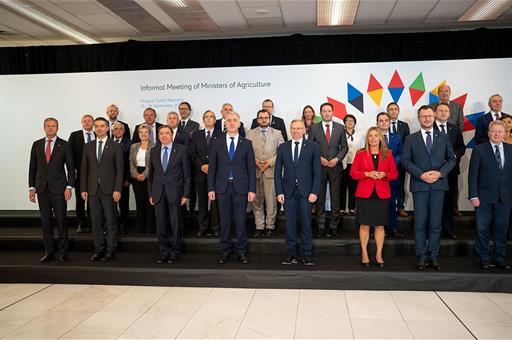 Food security and the consequences of the war in Ukraine are the focus of the informal Council of EU Agriculture Ministers in Prague, attended by Spain’s Minister of Agriculture, Fisheries and Food, Luis Planas.

Minister Luis Planas has advocated the need for an urgent and concerted response from the international community to avoid a food crisis in the most disadvantaged countries, which are the most vulnerable to the consequences of the war in Ukraine, such as rising prices or the lower availability of cereals and raw materials.

In the informal Council of Ministers of Agriculture of the European Union (EU) held in Prague, Planas has appealed to the responsibility that this has as the world’s leading food exporter for the restoration of normality in the markets. The minister pointed out that although the EU effectively protects its internal food security, without fear of food shortages, it must be “ready to respond” because there are many countries outside the European Union that have serious difficulties in obtaining supplies. The price of the most basic foods in these countries is beyond the reach of broad layers of the population, which implies the risk of political and social tensions.

To stabilise the markets and to ensure food sufficiency, the minister considered key that countries do not adopt measures to restrict exports and information and transparency. In this regard, he highlighted the importance of the European agreement to share data on the availability of grain, oilseed, seed, and rice reserves.

Although Europe does not currently have a supply problem, Luis Planas has pointed out that the growing inflation, which he hopes will moderate and go down in the coming months, reduces the purchasing power of families, a latent concern in the Government, but that it is about stopping with measures that mitigate the impact of the growing cost of energy and raw materials.

In this sense, he explained that the crisis due to the rise in prices and the scarcity of raw materials is also accompanied by a sharp increase in the prices of energy and fertilisers, which can affect the normal development of crops and productions. and that it does not favour the stabilisation of the markets.

At this juncture, Planas has appealed to the unity of efforts to offer an urgent and coordinated response to stabilise trade in raw materials and food. Once again, the minister advocated multilateralism and coordinated work with international institutions responsible for preserving food security, such as the Food and Agriculture Organisation of the United Nations (FAO).

The Spanish minister has also referred to the convenience of analysing European strategies, such as the Green Deal, and adapting them to the current context, as a consequence of the effects of Russia’s war in Ukraine on food systems. “We are in a difficult moment, we have to meet the objectives of the Green Pact, but we also have to look at the day to day and ensure that all families have a sufficient supply of food.”

And so that food production capacity is not endangered, the minister has asked the European Commission to take measures as soon as possible to ensure the maintenance of the activity of the fertiliser production plants.