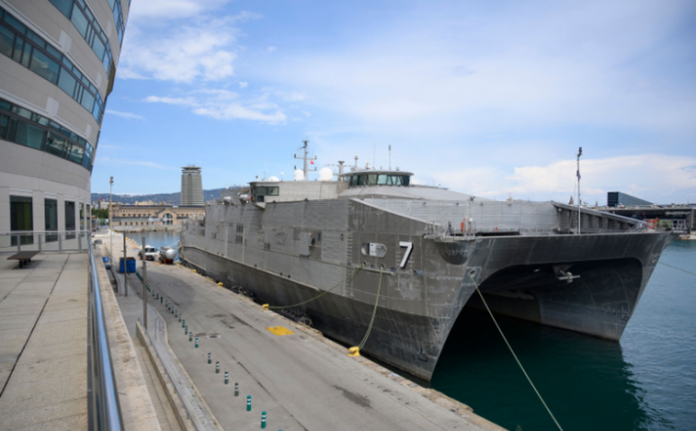 One of America’s fastest battleships, the USNS Carson City, is docked in Barcelona harbour this week.

The Carson City, the seventh ship of the Spearhead class of the United States Navy, one of the fastest warships in the world, is 103 metres in length, but despite her size, is capable of exceeding speeds of 80 kilometres per hour.

The main feature of the ship is its double hull, making her a catamaran, that allows water to pass under it and gives stability to the ship. In addition, its shallow draft -which does not reach four metres- further reduces the friction of the ship.

The expedition ship will remain this week in Barcelona, ​​where it will carry out a change of crew -composed of 22 members-. Its main mission is to provide support in the world’s oceans and seas to any army or government agency that requires it. She is thought to act as a command centre and coordinate -thanks to her speed- attacks more efficiently. She can carry more than 300 soldiers for four days and her hold has the capacity to hold up to 600 tons.

Built in 2016 at the Austal United States shipyards in Mobile, Alabama, the Carson City is the seventh catamaran of its kind. An expeditionary fast transport ship estimated to cost $25 million a year to operate.

It has not yet entered into real combat, but its participation in 2018 in the ‘Baltops’ naval exercise, in the Baltic Sea, stands out among the many practices carried out, where it deployed several autonomous underwater vehicles to eliminate mines. In the Iberian Peninsula it is common to see it in Gibraltar, but not so much in a Spanish port, which has generated great interest.