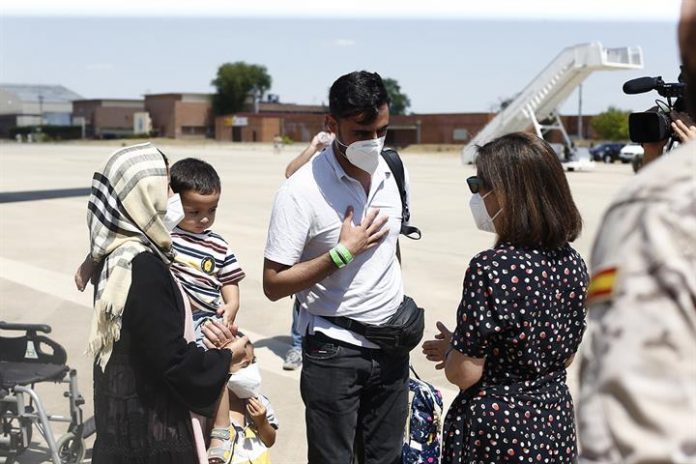 The Minister of Foreign Affairs, European Union and Cooperation, José Manuel Albares, and the Secretary of State for Migration, Isabel Castro, welcomed another 294 Afghan collaborators at the Torrejón Air Base, who recently left that country fleeing the Taliban regime, with which Spain has evacuated some 3,900 people.

Those who arrived this week came on a flight chartered by the Spanish Government and which had departed hours before from the Islamabad airport (Pakistan). The head of Spanish diplomacy underlined that “it has been possible thanks to the collaboration with my colleagues from the Ministries of Defence, the Interior, Inclusion, Security and Migration, Health, and of course, the Presidency”, time that has shown that “we were among the last to leave a year ago and today we continue working so that no one is left behind”, so that “Spain continues to show that it is a reliable partner and faithful to its commitments with its allies”, José Manuel Albares has remarked.

Since the first evacuation flight was organised, on August 15, 2021, the Government of Spain has carried out three operations (Antígona I, II and III) that have allowed the transfer of 2,561 people and, together those who arrived on July 21 and those of this week, would exceed 2,900.

Parallel to these special operations, the transfer to Spain of those former collaborators and other persons of interest who have been able to reach neighbouring countries and those close to Afghanistan has been promoted. There are a total of 942 people, who have obtained international protection in application of article 38 of the Asylum Law. These are 314 women, 277 men and 345 children, who already reside in Spain thanks to the work of the Spanish embassies in Islamabad, Tehran, Abu Dhabi, Ankara, New Delhi, Nur-Sultan and Moscow. The diplomatic delegations have actively collaborated in the evacuation and transfer of all of them, and continue to process the requests of other Afghan citizens.

Among the total of almost 3,900 people evacuated by the Spanish Government are, in addition to former direct collaborators of our presence in Afghanistan, civilian collaborators from EU and NATO countries and diplomatic personnel, whose lives were at risk after the reinstatement of the regime Taliban in Afghanistan.

Of the people who arrived in Antígona I and Antígona II (reception deployment coordinated by the Ministry of Inclusion between August and October 2021), 1,900 entered the system; They have now been joined by the 63 who arrived on July 21. At the Torrejón de Ardoz airport facilities, as happened a year ago, a provisional transit device has been deployed to assist and accompany families from their arrival, following a protocol coordinated by the Ministry of Inclusion, through the Secretary of State for Migration, and in collaboration with professionals from the different ministries.

The Afghan collaborators, therefore, have received, as soon as they landed, accompaniment at all times, they have been documented by the Police, basic sociodemographic information has been collected, they have spoken with UNHCR and OAR to receive information on the rights granted by the international protection and some have been subjected to random health checks. Finally, those who have expressed their need to enter the reception system will be referred to housing resources. In this sense, Isabel Castro has pointed out that “the reception system is once again made available to these families to provide them with progressive autonomy, as well as social and labour insertion; throughout the process, individualised integration itineraries are worked on.”

This attention is structured in two phases. The first, reception, provides for their residence in places in the system and the second, preparation for autonomy, is responsible for providing aid to cover basic needs.

Spain is also helping to alleviate the delicate humanitarian situation in Afghanistan with aid of 33.8 million euro between 2021 and 2022, through the Secretary of State for Foreign and Global Affairs and the Spanish Agency for International Cooperation for the Development and the Autonomous Communities, and has committed four million more for next year.

A year ago, the Spanish Armed Forces had an exemplary participation in the rescue operation of people in Afghanistan, the most important carried out by our country, recognised by the national and international media with different prizes and awarded by public and private institutions.

More than 2,200 Afghan collaborators and their families managed to reach our country from the convulsive Kabul airport during ten intense days at the end of August 2021, within the framework of an operation planned, deployed and executed in record time.

The mission involved the crews of the 31st Wing and the personnel of the Air Deployment Support Squadron (EADA) of the Air and Space Force, the Special Operations Command (MOE), the Air Evacuation Medical Unit (UMAER) and the Civil-Military Cooperation Battalion (CIMIC) of the ROI 1 Army, all of them under the direction of the Operations Command (MOPS).

A total of 17 rotations of three Airbus A400 aircraft (Dubai-Kabul-Dubai), 10 Air Europa flights (Dubai-Torrejón) and a first A400 flight (Dubai-Torrejón) were carried out since August 19 to get as many as possible of Afghan citizens at the Kabul airport before the advance of the Taliban.

Likewise, at the Torrejón Air Base, the Air and Space Force and the Military Emergency Unit (UME) set up a Provisional Transit Facility in just a few days to house the evacuated Afghan families who had just arrived in Spain.

Most of the more than 2,200 rescued were former Afghan collaborators (1,671) of the Spanish troops during the 20 years that the deployment in the country lasted, but they also removed collaborators from the European Union, the US, Portugal and NATO.

Later, in October, a new evacuation operation was carried out with the arrival of two planes, one civil and one military, from Pakistan, with 244 Afghan collaborators who were unable to leave the country in the first phase of August.

On July 21, another military plane arrived with 63 Afghan citizens from Islamabad, the Pakistani capital, at the Torrejón base, where it was received by the Defence Minister, Margarita Robles.

The arrival this week of this flight with around 300 people is the largest evacuation operation since last summer. To carry out this latest evacuation, from the Operations Command (MOPS) military teams have been deployed to Pakistan that have served as a coordinating element and to facilitate the diplomatic action of the Ministry of Foreign Affairs, European Union and Cooperation.

Government supports the goal that aviation achieves climate neutrality by 2050

The Gross Domestic Product of the Spanish economy grew by 1.5% in the second quarter