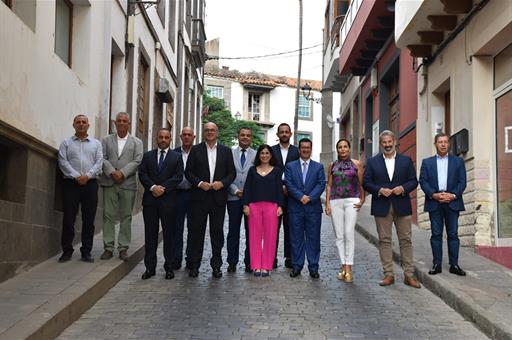 The Minister of Health, Carolina Darias, has highlighted the importance of municipal action to achieve, together with the Government of Spain, the goal of ending HIV as a public health problem by 2030.

This was stated in the act held in the gardens of the Municipal Museum of Arucas on the occasion of the joint adhesion of the 11 town councils that are part of the Commonwealth of the North of Gran Canaria, which add a population of 124,000 inhabitants to the Fast Strategy -Track Cities through the joint signing of the Paris Declaration.

During the ceremony, the mayors of Arucas, Artenara, Villa de Firgas, Aldea de San Nicolás, Villa de Moya, Santa María de Guía, Tejeda, Teror, Valleseco; the accidental mayor of Gáldar and the mayor of Agaete signed this initiative aimed at achieving the 95-95-95 objectives: 95% of people with HIV diagnosed, 95% in treatment and 95% undetectable, it is necessary to comply with another transversal such as zero HIV-related discrimination.

“It is not surprising that the 11 municipalities of the North of Gran Canaria jointly sign this important commitment, in response to HIV, because you have always been characterised by being an integrating, transversal and transforming movement”, the minister stressed.

After pointing out the importance of municipal action as a catalyst for social change, she added that, as municipalities that are members of the Commonwealth, “they know the importance of working together to address issues of common interest.”

In this sense, she referred to the exemplary commitment that the Canary Islands are showing against HIV, not only with this signature of the eleven municipalities of the Mancomunidad, but also with the adhesion of Las Palmas de Gran Canaria and with that of the three municipalities of El Hierro that made it the first Fast-Track island.

Likewise, the minister has had words of recognition for the commitment of all the associations and activists who leave their skin in the defence of the rights of people with HIV and has had a special memory for Darío Jaén. Darias has made a call to continue with the task that this pioneer activist of the cause began, until reaching the 95-95-95 objectives.

Spain, a benchmark for local action

Spain is a clear benchmark for local action to meet the global objectives of eliminating HIV as a public health problem, the minister recalled, adding that, with the signing of the 11 municipalities of the Commonwealth of the North, there are already 32 the Spanish cities and municipalities (15 of them in the Canary Islands) that have made the infection control objective for 2030 their own.

The leadership of Spain has materialised in the designation of Seville as the venue for the next world meeting of Fast Track cities, to be held in October 2022, with the slogan Leading Together, Liderando Juntos.

Since the signing of the Paris Declaration in 2014, the joint effort of many cities around the world has marked a before and after in the response to the HIV epidemic. Spain is already a benchmark for its commitment to the fight against HIV and has the opportunity to become the country in Europe with the most cities subscribed to the strategy.