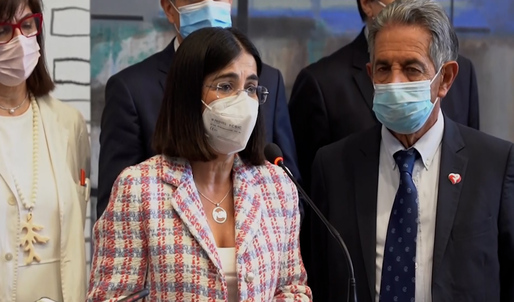 The Minister of Health, Carolina Darias, has asked for “prudence” and has returned to recommending the use of the mask in the face of the increase in Covid cases in Spain.

She has also called for the booster dose to be given to those who do not yet have it, while she is waiting to find out what the Vaccine Conference determines about the fourth dose and “when” it should be inoculated.

Darias has made these statements after the visit she has made to the Marqués de Valdecilla Hospital in Santander, accompanied by the president of the autonomy, Miguel Ángel Revilla.

The recommendation on the use of the mask again indoors made by Darias, joins that of autonomies such as Catalonia, whose Minister of Health, Josep Maria Argimon, has expressed concern about the increase in cases and the increase in patients admitted to hospital ICU due to Covid, which have gone from 26 to 46 in three weeks, as well as due to the rise in hospitalisations.

The Community of Madrid, through the vice president of the regional government, Enrique Ossorio, has also recalled that “the recommendation to use masks by vulnerable people, those with immunosuppression or pregnant women is maintained”, but now not only for them, but the recommendation is also extended to all people who are in closed spaces for public use or who attend large events.

And it is that the epidemiological data from Madrid show a cumulative incidence at 14 days of 1,500 cases per 100,000 inhabitants in people over 60 years of age (the only age group that is reported after the change in the surveillance model).

Regarding the fourth dose of vaccine for people over 80 years of age and vulnerable people, Darias has insisted that they are waiting for what the Vaccine Conference determines and “when” it should be inoculated. She pointed out that the Report meets periodically to analyse the situation, and will continue to do so, and that the Ministry will be open to its new proposals to know when to proceed with the vaccination of these people “or any other decision that it may adopt.”