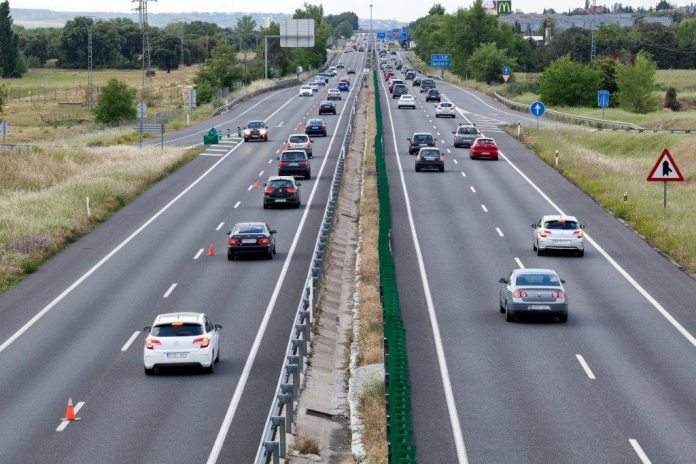 Today marks the start of the first summer getaway, which will see traffic getting busier on the road network as those in the inland areas head to the coasts and the mountains to begin their summer holidays.

Traffic regulation and management measures will be adopted and the behaviour of drivers on the road will be monitored at the roadside and from the air. 34 Guardia Civil camouflaged motorcycles are incorporated into the surveillance as a pilot test. They will circulate during the weekends through the areas with the highest motorcycle accident rate. Concern about the increase in deaths on motorways and highways, but they are still conventional roads where 7 out of 10 people die.

Starting today, Friday at 3:00 p.m., the first special traffic operation of the summer will begin, a device that will be extended until midnight on Sunday, July 3, and for which 4.5 million road trips are anticipated. For the entire month of July, the number of movements expected is 44 million.

As usual and not only in special operations, but during all summer weekends, the most unfavourable times to start the trip are between 3:00 p.m. and 11:00 p.m. on Friday and during Saturday morning, where the traffic will be intense especially at the exits of the big cities. On Sunday afternoon, with the return of many citizens to their places of residence after the end of the weekend, there will also be a greater intensity of traffic entering urban centres, which will last until late at night.

The roads by autonomous communities with the highest traffic intensity are usually:

In addition, this year Operation Crossing the Strait has been resumed, which means that more than 700,000 vehicles of citizens from other European countries will travel on our roads, returning to their countries of origin in Africa. There is also the Passage to Portugal, for which the DGT, in coordination with the Portuguese authorities, will serve another 250,000 more vehicles that will circulate through our territory, from France to Portugal for holidays.

To facilitate road mobility, Traffic will establish the following measures:

Installation of reversible and additional lanes with cones at times of greatest traffic flow and sections on certain roads.

Establishment and signalling of alternative itineraries.

Stoppage of the works that affect the carriageways on all roads to minimise the effect on traffic during the days of the summer departure-return operation.

The holding of sporting events and other events will be limited.

The movement of lorries transporting dangerous goods and vehicles that require special authorisation to circulate at certain times of the days with the most trips will be restricted.

Any incident on the road will be promptly reported through the newsletters of the radio stations, on social networks with the hashtags #VeranoSeguro and #SaberloEsEmpezarAEvitarlo, on the internet www.dgt.es and on the 011 telephone number.

WE CARE FOR THE SAFETY OF USERS

In addition to facilitating mobility by road, we also want trips to be safe, for which the General Directorate of Traffic has the following means:

780 fixed speed control radars, of which 92 are sectional.

39 drones for regulation activities, 23 of them with reporting capacity.

34 Guardia Civil camouflaged motorcycles that will circulate on the roads with the highest motorcyclist accident rate with the aim of reducing accident rates and verifying that responsible driving is carried out. These bikes are part of a pilot test that will take place during the summer weekends.

Campaign to monitor compliance with speed limits. Next Monday, Traffic launches a special speed control campaign in which, for 7 days, surveillance on roads will be intensified to verify that the limits established on the roads are complied with. As announced at the beginning of the week, surveillance will be increased with mobile radars mounted on labelled and camouflaged vehicles of the Guardia Civil Traffic Group on motorways and highways due to the increase in deaths on these roads, without forgetting that they are in the conventional roads where 7 out of 10 people die.

PUT INTO PRACTICE WHAT IS KNOWN

Better slower, especially on conventional roads, where the generic speed is 90km/h.

Respect the speed established on each road and maintain a safe distance from the preceding vehicle. Invading this safety distance is aggressive, unacceptable and, most seriously, it causes accidents.

If you drink, do not drive and if someone in the group you are with has been drinking, it is your responsibility not to let them drive. For minors, the only rate is 0.0.

Turn off the mobile if you are going to drive or put the car mode on those devices that have it incorporated. There is nothing that cannot wait. In addition, if you carry your mobile in your hand, 6 points are deducted from your driving licence.

Wear your seat belt properly and keep minors in their child restraint system, both on long and short journeys. With the entry into force of the reform of the Law there are 4 points to deduct for not wearing it or wearing it wrongly.

Stop every two hours on long journeys to rest. Driving fatigue is a bad ally.

Special attention to motorcyclists and other drivers due to the vulnerability of two wheels.

If you are a bicycle user, in addition to the helmet, you must ride with lights and reflective clothing at night or in low visibility conditions.

In the case of pedestrians, if you walk on roads outside the town, remember that you must do so on the left and if it is at night or in weather or environmental conditions that significantly reduce visibility, you must wear a vest or other reflective clothing. Every year more than 100 people die after being run over on the road.