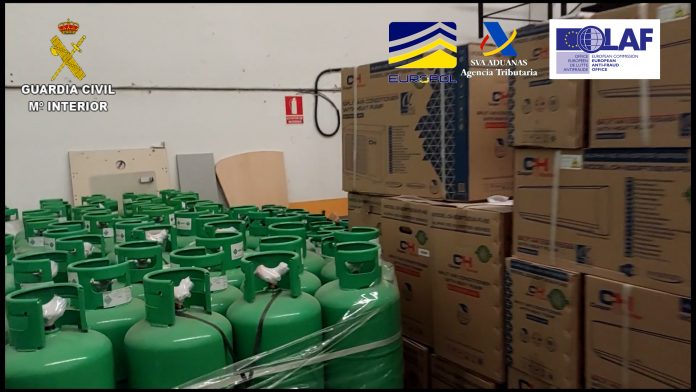 Within the framework of Operation “Marum”, carried out jointly by the Guardia Civil, the Tax Agency, Europol and OLAF, an important criminal organisation has been dismantled, structured on four levels, dedicated to illicit trafficking in Spain of greenhouse gases, that is, asphyxiating fluorinated gases that deplete the ozone layer, many of them even flammable.

In the operation, 27 people have been arrested, including the leaders of the network, and 3 investigated, for the alleged crimes of belonging to a criminal organisation, smuggling, against the Public Treasury and Social Security, money laundering, against the environment, against public health and against the rights of workers.

110 tons of different types of gas valued at 11 million euro have been seized, several cases for transferring gas to air conditioning, 364,000 euro in cash, several high-end vehicles, a large amount of documentation and computer equipment, 600 air conditioning units, in addition to 435 grams of cocaine base, 435 ecstasy tablets, material for cutting narcotic substances, a precision scale, a press and other effects used for drug trafficking. Likewise, 20 house searches have been carried out, 10 companies have been inspected and arrests have been made in the provinces of Granada, Valencia, Albacete, Madrid, Toledo, Murcia, Seville, Almería, Jaén, Córdoba and Badajoz.

As a precaution, bank accounts of the members of the organisation have been totally or partially blocked.

The investigations began in September 2021, when officers from the environmental branch of the Guardia Civil, SEPRONA, were able to verify that greenhouse gas (GHG) imported from China were being clandestinely sold in different locations in Granada at a price three times below the market price by not pay the taxes corresponding to the Spanish Treasury, for which a joint investigation was opened with the Central Operational Unit for the Environment of the Guardia Civil (UCOMA), Europol, OLAF and the Tax Agency, acting both as judicial police and as aid jurisdictional.

As a result of these investigations, a network of companies was discovered structured into four levels of criminal operations in which, on the one hand and as the first level, is the importer of these gases whose company is based in Valencia and, below, a network of distribution whose two leaders have their base of operations in Granada. It was also discovered that the latter also had a secondary distribution network spread throughout Andalusia and other Spanish provinces.

The importer of gas from China introduced it irregularly under cover of the figure of the so-called external community customs transit, which allows a company to circulate through the territory of the European Union merchandise imported from non-community countries destined for a third country, located outside the European Union. All this without the need to be subject to said merchandise to the satisfaction of any type of import right, or tariffs or taxes or commercial policy.

In this way, tons of gas were introduced into Spain, specifically through the port of Valencia, which would supposedly travel through several EU countries to their final destination in a third country such as Jordan, but the truth was that this merchandise would remain in Spain and would be distributed by the organisation throughout the national territory for a final amount three times below the market price, a price that was propitiated by the aforementioned tax exemption, in addition to the avoidance of the Tax on Fluorinated Greenhouse Gases. In particular, the non-payment of the Tax on Fluorinated Gases, to the extent that it is a specific tax figure of the Spanish system, generates significant unfair competition in the sector of their distribution in the national market.

To facilitate the distribution of the merchandise through Spanish territory, the head of the organisation had created a ghost company in Portugal that was supposedly the recipient of the merchandise, which gave the appearance of legality to the gas transports if they were eventually inspected by the agents, trying to make them believe that the cargo was going to the neighbouring country.

The detainees laundered the money obtained through a ghost company created for this purpose, or by buying high-end vehicles or real estate; but above all they did it through a Madrid travel agency, whose managers have also been arrested, where customers paid for gas as vacation packages or hotel services.

Regulation (EU) No. 517/2014 of the European Parliament and of the Council of April 16, 2014 on fluorinated greenhouse gases regulates the introduction of these gases into the European Union and provides, among other things, that operators must be registered in the F-Gas portal, and the investigators have verified that the companies attached to this criminal organisation were not registered in said registry, nor did they have authorisation for the commercialisation and distribution of fluorinated gases, nor did the workers have the adequate training to traffic, handling, storage and sale of greenhouse gases (GHG).

On the other hand, in the month of March, during an inspection of an industrial warehouse owned by the detainees, the agents located a consignment of R404A gas that had entered through the port of Valencia. These bottles had to have ended up in a warehouse in Hamburg (Germany) for their subsequent export to Jordan, however they were found in a warehouse in an industrial estate in Jun (Granada), said gas fraudulently entering Spain.

It should be noted that the transfers between bottles of these types of gas require authorisation and must be carried out in optimal safety conditions for people and the environment, something that was done in a rudimentary way with the consequent danger, since the distributors could mix gases of different nature, which usually leads to serious breakdowns for the equipment in which they are used.

The proceedings are available to court number 4 of Granada and the Environment Section of the Granada Prosecutor’s Office.