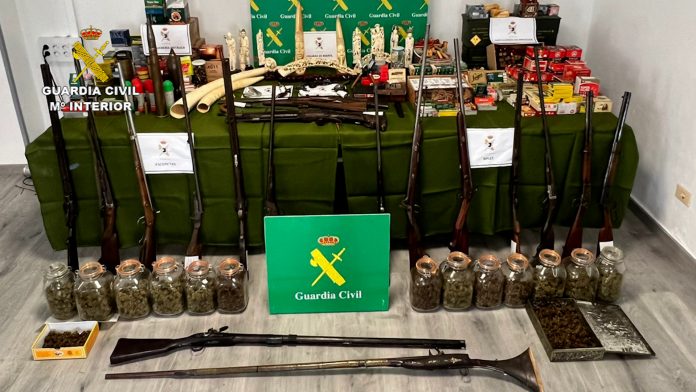 The Guardia Civil, within the framework of the so-called “SAYAL” operation, has proceeded to arrest 12 people belonging to an organisation dedicated to arms and ammunition trafficking nationwide.

In the operation, 17 searches have been carried out in the provinces of Madrid, Toledo, Seville, Navarra, Gerona, Tarragona, Pontevedra, Lugo, Salamanca, Murcia and Melilla where 339 firearms have been seized, 37,426 metallic cartridges of different calibres, 13.2 kg of gunpowder, and silencers, among other effects.

The operation began in October of last year, when the agents, in another independent operation, proceeded to arrest in Madrid one of the main ammunition dealers in the country, who had sold more than 36,000 metallic cartridges through the Internet that he sent to their buyers by means of postal parcels.

As a result of this investigation, it became clear that this individual had been engaged in this illegal activity for several years and that the buyers of said ammunition were people who possessed firearms illegally and therefore could not acquire them in authorised establishments, having to resort to the black market to obtain them.

The subsequent analysis of the documentation and computer equipment seized from said illegal ammunition supplier allowed the identification of many of its buyers, who turned out to be people who possessed unregistered firearms, some of them related to crime.

Once the buyers of the ammunition had been identified and the places where it was suspected that the illegal weapons they possessed might be hidden, the exploitation proceeded in two phases of the operation. The first of them in the month of February and the second last week, proceeding to the realisation of a total of 17 entries and searches in 11 Spanish provinces.

One of the detainees in Madrid had 109 firearms seized, most of them short (pistols and revolvers) and among which was also a state-of-the-art and fully functional AK47 automatic assault rifle (war weapon), 11 blanking pistols transformed to fire live and 4 semi-automatic pistols completely handcrafted; in addition to more than 14,000 metal cartridges of different calibres, 5.6 kg of gunpowder for the manufacture of ammunition and abundant parts and essential components for the assembly and handling of firearms.

Another of the people detained in Toledo had an enormous arsenal of weapons seized, made up of 104 firearms (75 short, 20 long, 4 detonators converted to make live fire and 5 other types of prohibited weapons) and 5,936 metal cartridges of different types. Many of the weapons seized from this detainee had been illegally introduced into our country after having been acquired by him abroad.

In Lugo, in addition to numerous weapons and ammunition, 2.7 kg of marijuana and 15 tusks and ivory figures were seized from an individual who was finally arrested in Melilla.

7,230 percussion caps and large quantities of cases, projectiles and various reloading machines for the illegal manufacture of ammunition

More than 100 chargers, many of them high capacity

Among the seized weapons, the 17 weapons of war seized (assault rifles and submachine guns) stand out. Given their capacity to fire automatically (machine gun), their illegal possession by individuals poses a maximum risk to citizen security, both in the event of their use as well as its possible diversion to criminal or terrorist organisations.

Some of the detainees had their weapons loaded and ready for use, or in holsters to carry them hidden under their clothes on public roads, evidencing their intention to make effective and illegal use of them.

With this action, the high number of weapons seized, most of them short (and therefore easily concealable), have been prevented from reaching the black market and reaching the hands of criminals.

Seizure of weapons during the last 5 years

The possible links between arms trafficking and organised crime make the fight against this threat one of the priorities of both the national security strategy and that of the European Union, which is why the Guardia Civil has been carrying out constant effort to detect and neutralise the channels of illegal supply of firearms in our country, as evidenced by the fact that in the last 5 years more than 108 operations have been carried out against arms trafficking networks with the result of 479 people arrested and the seizure of 5,240 firearms (many of them war weapons), 655,073 metal cartridges, 727.4kg of explosives, more than 780,000 euro in cash from said illicit activities; dismantling 21 illegal workshops for the manufacture of arms and ammunition.

The possible links between arms trafficking and organised crime make this threat one of the 10 priorities of the European Union in the fight against organised crime, for whose fight since 2014 the EU implemented the European Multidisciplinary Platform against Criminal Threats (EMPACT) of firearms of the EU, which is precisely led by Spain and specifically by the Information Headquarters of the Guardia Civil in its capacity as driver of said EMPACT.

The aforementioned EMPACT promotes different operational actions to fight against this threat, among which is OA 2.3 (TITAN) precisely to prevent, as in the case at hand, the diversion of weapons and ammunition to the black market, an operational action that an officer of this Information Headquarters (UCE3) leads at European level.

The operation has been carried out by the Information Office (UCE-3) together with the Information Groups of the Toledo, Seville, Navarra, Gerona, Tarragona, Pontevedra, Lugo, Salamanca, Murcia, Melilla and Madrid Commands; with the support of the Citizen Security Units of said Commands, and the Cynological Service (weapon detection dogs).