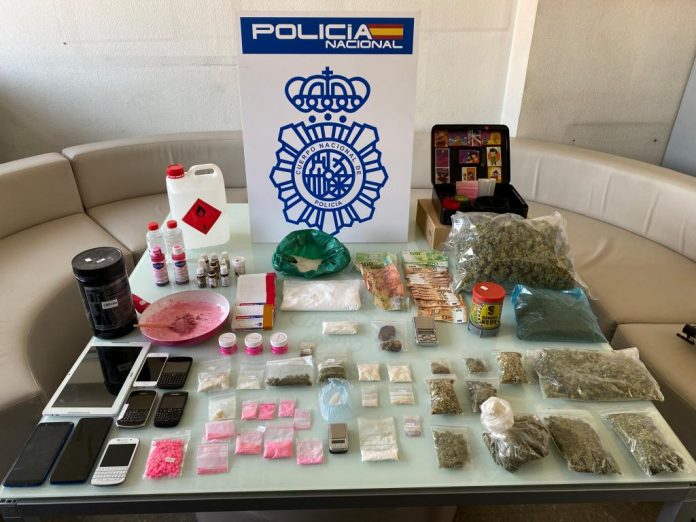 Officers from the National Police have dismantled a laboratory for the production of the synthetic drug known as “pink cocaine” in the Madrid town of Torrejón de Ardoz.

Two people have been arrested as allegedly responsible for the preparation and distribution of the narcotic substance in Madrid, Toledo and Malaga. Also known as “tucibi”, “el color” or “nexus”, the drug was made by a Colombian man in his own home where he also had an indoor marijuana plantation.

The first investigations took place when the investigators received information from the Colombian police authorities in which they realised the presence in Spain of a man of Colombian origin and his Spanish partner, who were developing a laboratory as a centre for production and adulteration of the substance 2CB (Tucibi). With all the data received, the agents managed to identify the people who were involved. One of them, a Colombian citizen, was cooking the drug and had already been arrested for similar acts in the Madrid district of Tetuán.

The second, a Spanish citizen, helped the first both in the manufacturing tasks and in the facet of distribution, sale and distribution of the narcotic substance. Like his partner, he did not carry out any legitimate work activity, restricting himself to carrying out drug deliveries inside his car in the Madrid municipalities of Torrejón de Ardoz, Alcalá de Henares, Fuenlabrada, Getafe, Leganés, Madrid city, in Toledo municipalities such as Illescas, and even in coastal towns of Malaga. These trips to Andalusia were made by vehicle at night and he stayed in towns such as Marbella or Fuengirola for 30 minutes distributing the drug, to later return first thing in the morning.

Finally, the investigators proceeded to carry out four entries and searches before the members of the investigated group travelled to Colombia to elude police action. After entering the clandestine laboratory, the agents discovered the drug they were making, which was mainly made up of ketamine and MDMA (ecstasy), being cut and adulterated with various substances such as caffeine. In addition, a significant amount of oxycodone – a synthetic opiate used in severe pain processes – was seized, which was used to adulterate the tucibi.

In addition to the activity carried out by those arrested, in order to obtain greater benefits and defray the cost of the chemical substances or synthetic derivatives that they needed to make the tucibi, they had established a sophisticated indoor marijuana plantation in the same building equipped as a laboratory. Once the plantation was discovered, the agents found a crop of 76 plants, which were maintained thanks to an electric fraud. Likewise, this dangerous combination of chemical products for the preparation of the drug, together with the numerous sources of heat necessary for the cultivation of marijuana, made the building a dangerous location for neighbours and passers-by.

In addition, during the search, a detonating firearm, an electrical immobilisation device and two automatic knives were seized.