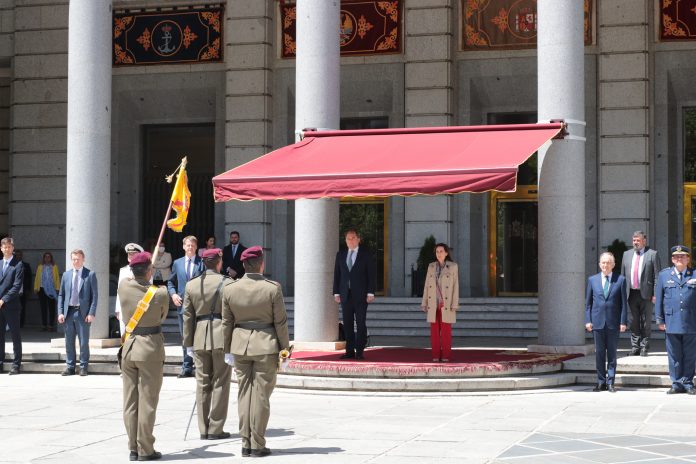 The Spanish Defence Minister, Margarita Robles, and her British counterpart, Ben Wallace, held a meeting at the Ministry of Defence, in which they highlighted that the situation in Ukraine continues to be a priority for both countries and highlighted their magnificent bilateral relations, while Madrid prepares to hold the next NATO summit.

This is the first visit made by a British Minister of Defence to Spain since the then ministers Geoff Hoon and José Bono met in Toledo in 2005, and it is part of the meetings held by the Spanish Defence Minister with her counterparts from partner and allied countries at a delicate moment in the international situation.

After receiving the Secretary of State for Defence with the ordinance honours, both ministers held a bilateral meeting in which they exchanged views on the situation in Ukraine. In this regard, Robles pointed out the need to continue providing military, political and humanitarian assistance to this country, in addition to “supporting the ongoing investigations to bring to justice those responsible for the war crimes that have been committed.”

“The war we are experiencing is a priority for the countries of the European Union and for NATO, our support is total and absolute, as well as the most resounding condemnation of Russia’s cruelties,” Robles said in a subsequent meeting with the media.

In this same sense, Wallace has declared that both Spain and the United Kingdom are acting “side by side” to help the population of Ukraine, which is defending its country in the face of a situation that it has described as “appalling”, due to the existence of various forms of war crimes by Russia.

“Russia is totally convinced that it has to finish off the country. What they want to do is end the very idea of ​​Ukraine as a nation and we are seeing it on the ground,” Wallace said at the joint appearance. “But if we have to be happy about something, it is that both the European Union and NATO are very united”, he added.

Regarding the NATO Summit, which Madrid will host on June 29 and 30, the minister has indicated that it is an opportunity to “reinforce the validity of our shared values ​​and the strength of our unity and cohesion”, in addition to evaluating very positively the applications for membership of Sweden and Finland, which are aligned with the Spanish position of keeping the “doors of the Alliance open”.

“That this summit is held here in Madrid is the recognition of all NATO members to Spain as a serious, reliable, responsible and committed partner, always defending the values ​​of the Alliance, democracy, peace, freedom and security”, said the Defence Minister.

Robles has assured that it will be a historic summit, due both to the expansion to two more important members of Sweden and Finland, and to the approval of the new NATO strategic concept, which will be signed in Madrid the same year that Spain celebrates 40 years of belonging to the Alliance.

In this regard, Robles expressed her satisfaction with a text that has improved in successive drafts with everyone’s contributions and that “despite the existence of a brutal open war in Europe, it reinforces the idea of ​​balanced deterrence and defence at 360 degrees and look to the future.”

NATO’s new strategic concept must respond to the new challenges that arise in the form of hybrid warfare and areas of confrontation such as cyberspace or maritime space, reinforcing the importance of the collective defence of the Alliance, while at the same time betting for cooperative security to project stability and help the countries around us.

“I am looking forward to attending the summit, I think it will be a great success, and it is also very important because people will realise that NATO is for everyone and that we are not only focused on parts of the European geography,” declared for his part the British Minister of Defence.

Wallace has asked not to “underestimate” Russia’s influence in countries like Mali and Libya through the Wagner group, with “weapons” such as illegal migratory flows or attacks in cyberspace.

The two politicians have reviewed the numerous exchanges and collaborations that take place at the military level between the two countries, between general staffs, hydrographic institutes, ships and units or exercises and in the field of military education.

Likewise, they pointed out the cooperation that Spain and the United Kingdom maintain in the field of the defence industry, where they share participation in such important projects as the Eurofighter or the A-400M transport aircraft, among others.

“Today’s visit highlights the magnificent bilateral relations between Spain and the United Kingdom in defence matters, and above all underlines the commitment we have to work for this summit to make it the success we need”, said Robles.

So far this year, Robles has held meetings with the German Defence Ministers, Christine Lambrecht; from France, Florence Parly, who left office last week, and with the Estonian Defence Minister, Kalle Laanet. Robles also met on May 19 with US Defence Secretary Lloyd Austin in Washington.