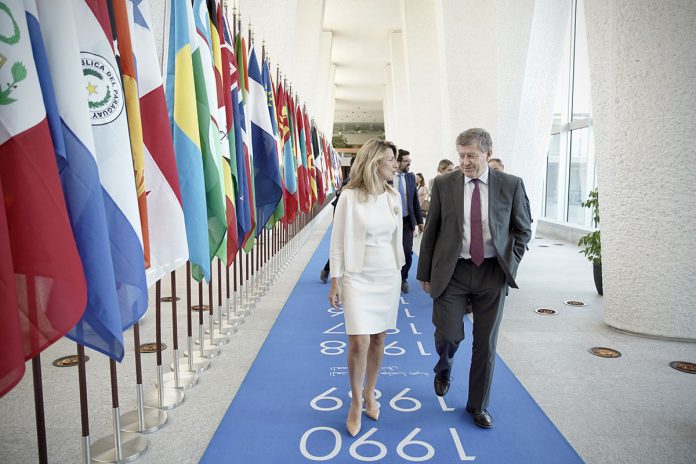 The Second Vice President and Minister of Labour and Social Economy, Yolanda Díaz, has delivered to the headquarters of the International Labour Organisation (ILO) in Geneva the instruments of ratification by Spain of Conventions 177 on home working and 190 on violence and harassment.

At the event, she was accompanied by the Director General of the ILO, Guy Ryder, who praised Spain’s commitment to the organisation and highlighted the level of cooperation between the parties. In addition, he valued the work of Vice President Díaz, who resumed the ratifications after more than a decade of paralysis, as well as the strong impetus she has given to social dialogue in her country, and the effects that the labour reform is having, fruit of that tripartite consensus.

Spain, at the forefront in ILO conventions

Spain thus becomes the country that has ratified the most international ILO instruments. To date, there are already 133 agreements signed with this UN agency dedicated to labour rights and social justice and which brings together governments, employers, and workers from 187 member states.

As explained by the vice-president, it is not a question of ratifying agreements, but of settling historical debts and demonstrating Spain’s commitment “to social justice and the dignity of working people”. Díaz has assured that she will continue this commitment soon with the ratification of Convention 188 on work in fishing and Convention 189 on decent work for domestic workers.

Ryder recalled that Spain had a long period of 11 years in which no agreement had been ratified and that it was thanks to the vice president that they have been resumed again. “With these two ratifications today, we put an end to this anomaly and renew our commitment to the global perspective that courageous and ambitious transformations must always have, also in the social and labour world,” said Díaz.

Convention 177 on home working, adopted in 1996, establishes regulations to improve the conditions of home workers. In Spain, it will enter into force twelve months after the date on which its ratification has been registered.

This agreement, the minister pointed out, “materialises equality between homeworkers and other wage earners, without the place where work is provided implying discrimination in the enjoyment of basic labour rights”.

“The future is here, we have to adapt and teleworking must always be a guarantee of freedom and opportunities for working people,” Díaz insisted.

Díaz underlined that this agreement offers, for the first time at an international level, protection against violence and harassment in the world of work that is transversal and with a gender perspective. “In this way, we are moving towards a more diverse, inclusive and feminist world of work, where security is a right for everyone”, she stressed.

The ratification of Convention 189 advances

Convention 189 on domestic workers was approved by the Council of Ministers in April and sent to the Cortes Generales. The ratification process is estimated to last a few months and after the summer everything could be ready to be deposited in Geneva, as well as Convention 188 on work in fishing, which already has the approval of the Legislature.

The minister announced that the Government is already working on the regulatory adaptations that this international instrument requires at the level of employment and social security.

The ratification of these Conventions is a reflection of the country’s commitment to the ILO, but above all to the need to address global challenges from a global perspective. “In the path of labour rights, no group or person can be left behind”, Díaz insisted