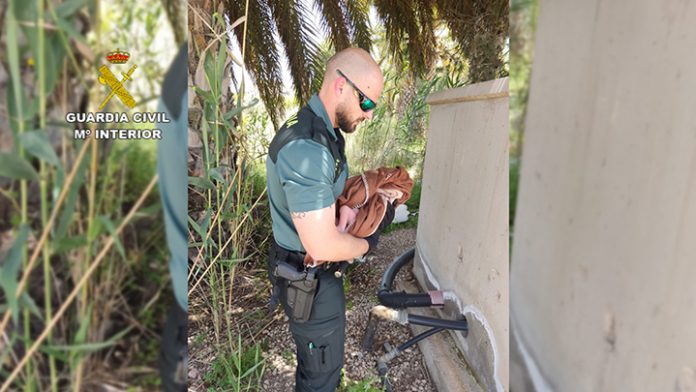 The Guardia Civil, in Almoradí (Alicante), saved the life of a new-born baby who had been abandoned by his mother on a road, shortly after giving birth in a ruined house.

The driver of a truck notified the Guardia Civil that he had seen a woman walking with her legs stained with blood and carrying a kind of bundle of blankets in her arms. The man was convinced that between the blankets he had seen the tiny limb of what appeared to be a baby.

A Guardia Civil patrol from Almoradí ​​quickly reached the location, a vacant lot next to an industrial estate located in the town of San Isidro. The officers found a woman, apparently well, who categorically denied the story provided by the witness and who refused to be assisted by the health team that had also attended.

However, the agents have found contradictions in the statements of the woman, who accompanied them to the ruined house where she had spent the night.

After inspecting the area and walking for a long time in the sun, about a hundred metres from the semi-ruined house, the patrol found some blankets rolled up behind some drums on the ground. By unrolling the bundle, the officers found the baby, who still had the umbilical cord attached. Although he had symptoms of dehydration, he was breathing normally and appeared to be doing well.

The ambulance immediately transferred the baby to the nearest hospital, where he has been admitted to the neonatal unit.

The perseverance of the witness and the officers are attributed to having saved the life of this little boy, whom the hospital nurses have called Noa. At the moment he is still hospitalised, although his general health is good. The facts have been brought to the attention of the Juvenile Prosecutor’s Office, which will decide the fate of the new-born.

The detained mother – 39 years old and Swiss nationality – has been handed over to the Orihuela Court. She is charged with a crime of child abandonment.