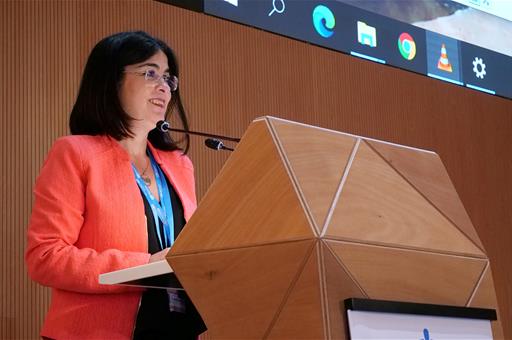 The Minister of Health, Carolina Darias, has underlined, at the 75th World Health Assembly, the essential role played by the United Nations Resolutions to achieve optimal levels of well-being and health.

Darias vindicated United Nations Resolution 1325, which recognises the role of women in conflict resolution, because “the fight for equality is, has been and will be the driving force to achieve a better world.”

Darias stressed that “the world needs peace”, to face current and future health challenges, such as the COVID-19 pandemic, Mental Health problems, communicable and non-communicable diseases, antimicrobial resistance, or climate change and its direct impact on our health, among others.

During her speech at the plenary session of the 75th World Health Assembly, which is being held in Geneva, the minister highlighted that the chosen motto, “Health for Peace, Peace for Health”, establishes the horizon of hope that she hopes humanity will achieve.

Darias began by expressing Spain’s condemnation of Russia’s invasion and aggression against Ukraine, provoking an unjustified and illegal war, and shared the country’s collaboration with the European authorities and the World Health Organisation (WHO) to bring Ukraine medical supplies, donation of medicines and making thousands of hospital and paediatric beds available.

In this sense, she indicated the fatal consequences that any conflict has on our lives and our health, since attacks on hospitals or medical missions deprive the basic right to health and health care. Thus, the 100,000 Ukrainian citizens who have arrived in Spain have the health card that guarantees universal coverage.

Commitment of Spain with the WHO

On the other hand, the minister has expressed Spain’s support for the candidacy of Doctor Tedros Adhanom Ghebreyesus in his re-election as Director General and also for the work that the World Health Organisation (WHO) has been carrying out, to continue promoting a strong Organisation, to continue leading efforts in preparing for and responding to health emergencies.

Darias pointed out that COVID-19 has left us with important lessons such as that efforts must be directed at guaranteeing global health and improving our health capacities, and as an example she cited the development of vaccines and the COVAX mechanism to guarantee access to vaccines.

Everyone’s goal, she added, is to ensure that 70% of the world’s population is vaccinated against COVID and she explained Spain’s commitment to vaccinating 92% of the population and occupying the top positions in solidarity donations, with 70 million doses.

The value of the public

Likewise, the minister assured that the health crisis due to COVID has made us even more aware of the value of what is public and of the need to strengthen national health systems, from primary care to specialised care, promoting new technologies, and ending the stigma and discrimination that affect the population affected by diseases such as HIV.

“The Global Health of the planet is our shared commitment. Let’s continue working together to achieve it. As Gandhi said, Peace is the way. And Health is the right that guarantees life all along the way”, she concluded.