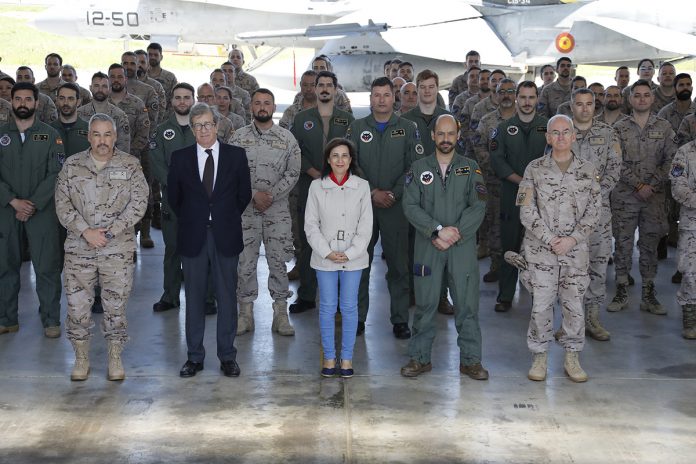 The Defence Minister, Margarita Robles, has visited the Spanish contingent deployed in the ‘Vilkas’ Tactical Air Detachment (DAT) in Lithuania, which reinforces the eastern flank of NATO integrated into the Baltic Air Police (BAP).

A total of 140 Spanish soldiers and eight F-18 aircraft are currently part of this detachment in a mission to which the member countries of the Atlantic Alliance contribute on a rotating basis and which guarantees the allied collective defence within the airspace of the republics Baltic Islands, preserving the inviolability of their skies. After the war between Russia and Ukraine, they have taken on other tasks such as border surveillance and training.

Robles highlighted this crucial work in achieving peace in “difficult times”, as well as their role within the Alliance. “It is a source of pride to know that our Armed Forces always work for peace with efficiency, training and preparation”, said the minister in a few words of thanks addressed to the members of the detachment, while expressing her wish that “This war ends soon.”

“NATO and Spain, as a serious and committed ally, have and will always have an enormous debt of gratitude to you. Congratulations for giving Spain an international presence,” added Robles, who travelled to Lithuania accompanied by the Chief of Defence Staff (JEMAD), Admiral General Teodoro López Calderón.

Upon her arrival at the Siauliai air base, the minister, who was also accompanied by the Spanish ambassador to Lithuania, José María Robles, was received by authorities including the Chief of Staff of the Republic of Lithuania, Lieutenant General Valdemaras Rupsys, the Lithuanian Deputy Minister of National Defence, Zilvinas Tomkus, and the acting head of the Siauliai air base, Lieutenant Colonel Eligijus Ruksnaitis.

The Minister subsequently went to the ‘Vilkas’ Tactical Air Detachment, where she attended the raising of the flag and an act of homage to the fallen, in commemoration of Armed Forces Day to be held on May 28.

The DAT ‘Vilkas’ (which means wolf in Lithuanian) is made up of troops from Wing 12, although it is made up of 15 different units, under the operational control of the Operations Command (MOPS). Six of the Spanish fighters are transferred under the control of the Alliance and the remaining two remain under national control to ensure the fulfilment of the mission. The bulk of the contingent is at the Siauliai base.

On April 1st, the DAT ‘Vilkas’ aircraft entered into service Quick Reaction Alert (QRA), which allows air police to be provided with fighter aircraft in a reaction time and flight of 15 minutes, capable of intercepting, identifying, and intervening in unidentified or hostile aircraft in eastern Alliance airspace.

The Minister of Defence has attended a briefing by the head of the Force of the detachment, Lieutenant Colonel David Soto Martínez, in which he has explained that since they entered service they have carried out 200 sorties, twelve ‘alpha scramble’ alerts and a total of 380 flight hours.

Robles has been able to see first-hand how the QRA service works and during the visit talked with one of the pilots who has explained what the planes are like and their flight characteristics. Later, she has also met flight personnel, maintenance personnel and mechanics, who have explained the dynamics of the work they do.

Due to the measures taken on the eastern flank of NATO after Russia’s invasion of Ukraine, the detachment has taken on other missions such as border surveillance patrols in the Baltic countries and eVA (enhanced Surveillance Activity) missions, reinforcement of surveillance in some CAP (Combat Air Patrol) areas.

Likewise, and also in relation to the Ukraine crisis, the Alliance has decided to reinforce integration and training tasks. Along with the Spanish aircraft, four JAS 39 Gripen aircraft of the Czech Republic Air Force provide the same service at the Siauliai base.

Before ending the visit, the Minister had a few words with the Deputy Minister of National Defence of the Republic of Lithuania, Zilvinas Tomkus, who thanked the continued presence of Spanish troops in the area.

The incorporation of the Baltic countries into NATO in 2004 meant the expansion of the allied airspace to the north-east of Europe bordering Russia. The Alliance, in response to its commitment to solidarity and with the aim of having air defence capacity throughout its territory, decided to create the BAP, to make up for the lack of a combat air force of the new members, Estonia, Latvia and Lithuania.

Following the invasion of the Crimean peninsula by the Russian Federation, the Alliance implemented a series of deterrence and response measures in 2014, including the integration of all NATO air defence systems.

Since 2006, Spain has participated in this mission eight times and has acted as the lead country in four of them. On August 1, their service will end, when they will be relieved by Hungarian planes.

Between August 22 and September 12, 2022, the deployment of four Eurofighters of the Spanish Armed Forces is planned in Amari, Estonia, in support of the German air detachment in that country and to carry out interoperability activities of German and Spanish Eurofighters.