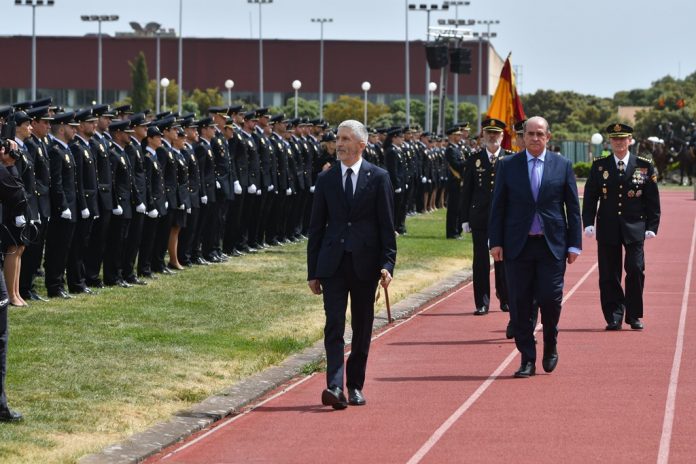 “More police officers and better pay has been, is and will be one of our priorities”, assured the Minister of the Interior, Fernando Grande-Marlaska, during the swearing-in or promise ceremony of the members of the XXXVI Promotion of the Basic Scale of the National Police.

The ceremony was held at the National Police School based in Ávila, and was attended by the Secretary of State for Security, Rafael Pérez; the director general of the National Police, Francisco Pardo, and the Mayor of the city, Jesús Manuel Sánchez, among other authorities.

The XXXVI Promotion of the Basic Scale of the National Police is made up of 2,523 agents, made up of 1,818 men and 705 women, who after taking the oath or promise of office will join their destinations throughout Spain in the coming days.

In his speech, the Minister of the Interior highlighted the effort made to recover police staff, which will allow “at the end of this year there will be almost 70,000 active police officers, 6,500 more than in 2018, and to which we will have to add the 5,159 student police officers and inspectors who will be in the training phase”.

Likewise, Grande-Marlaska has announced that “we will shortly announce a new public employment offer that will help us in our goal of continuing to increase the staff of the National Police throughout the legislature.”

Finally, the Minister of the Interior highlighted the presence of almost 30 percent of women in the promotion, “a positive figure, but we want to improve it”, and recalled the abolition of the minimum height requirement in the system for access to National Police to break one of those glass ceilings that limited the entry of women into the body. It has been “just a small step, but we will take more, bold and innovative, have no doubt”, he concluded.