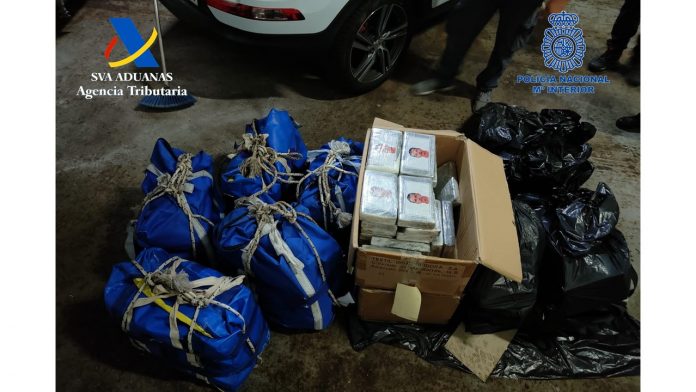 Officers from the National Police and officials of the Customs Surveillance Service of the Tax Agency, in a joint operation with the Argentine Authorities (PFA), have developed an investigation against a criminal organisation based in Argentina and Europe, dedicated to the maritime traffic of narcotics to through container ships.

The investigation began when the agents became aware of the existence of an organisation with these characteristics. As a result of the investigation, it was possible to determine the ‘modus operandi’ used by the organisation to transport the drug from Argentina to Europe, contaminating containers on board ships dedicated to the transport of goods through ‘rip off’ or ‘blind hook’ to extract it once said vessels touched European ports.

The main objective of the organisation was, through its branches in Europe, and specifically in Spain, to remove that narcotic substance when the ship had arrived at the Port of Santa Cruz de Tenerife. Continuing with the investigations carried out by the police forces involved, it was possible to identify the container in which the organisation had introduced the narcotic substance.

The organisation introduced the narcotic substance in the port of Zárate (Argentina), taking advantage of the connections that this organised group had in it, in this way the introduced drug headed for Spain.

Once the container ship reached the coast of the Canary archipelago, in the early morning of April 18, 2022, the agents established a surveillance device for both the ship and the container that was in its hold. During this period, the agents did not observe any suspicious movement of the container or any person who was preparing to extract the narcotic substance. Likewise, it was verified that the seals of the container had not been violated on board the ship. Taking this circumstance into account, the agents proceeded to open the container, finding five blue bags inside, with 150 packets of cocaine, with a total approximate weight of 165 kilograms.

Once the discovery of the drug was confirmed, the Argentine authorities proceeded to the arrest of the eight members of the organisation, related to the introduction of the drug in the container in Argentina, as well as the searches of the homes of those arrested where they were found. $323,000.

The “blind hook” or “rip off” is a technique consisting of introducing the drug into a container of legal or empty merchandise to subsequently extract the drug at the port of destination.