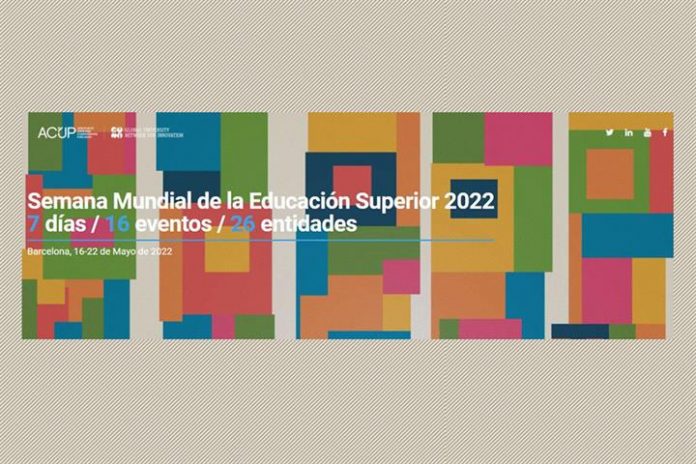 The local organiser of both events is the Global University Network for Innovation (GUNi), chaired and coordinated by the Catalan Association of Public Universities (ACUP), and has the direct support of the Government of Spain, the Generalitat de Catalunya, the City Council of Barcelona and the Barcelona Provincial Council.

During this week, more than 2,000 people from all over the world will participate in person and more than 8,000 in virtual format.

Between May 16 and 20, various national and international institutions will organise a series of events throughout Barcelona to discuss the future of higher education and university policy.

At the presentation ceremony of the World Higher Education Week, José Manuel Pingarrón, Secretary General of Universities, highlighted the “climate of collaboration that has existed between the different institutions participating in the organisation of both the World Conference and the program of events (Barcelona City Council, Barcelona Provincial Council, Generalitat de Catalunya, Government of Spain and UNESCO)”. Pingarrón has highlighted “the primary objective” shared by all the Institutions, which is “to place higher education in a central place for a week to enable its evolution and offer a better service to our changing society”.

The executive secretary of the ACUP and director of GUNi, Josep M. Vilalta, has highlighted that “during the World Week, and thanks to the participation of national and international institutions, Barcelona will become the epicenter of the discussion on the future of universities around the world.

In addition to the UNESCO Conference, the World Week has fifteen events throughout the city organised by a total of 22 institutions. With an eye on the future of the university sector, Barcelona will lead the way in reflection, innovation and transformation of higher education internationally. Other participating institutions include the Union for the Mediterranean, the Ibero-American General Secretariat (SEGIB), Menéndez Pelayo University, Times Higher Education magazine, la Caixa Foundation, several international university networks, the Ministry of Universities, the Generalitat de Catalunya, the Barcelona City Council, the ACUP and the Conference of Rectors of Spanish Universities (CRUE).

Vilalta added that “it is necessary to take advantage of the historical moment and the collaboration of all the Institutions to consolidate Barcelona as a world university capital”. And it is that the approach of the Organising Institutions of the World Week is long-term: “Through a series of innovative programs led by the GUNi world network in the coming years, we intend to become a node of knowledge in university matters of international reference. ”

Victòria Alsina, Minister of Foreign Action and Open Government of the Generalitat de Catalunya, has spoken in similar terms: “The World Conference on Higher Education will turn Barcelona into the capital of education for a week. But the will is to serve as a first stone to ensure that Barcelona, ​​and Catalonia, is a reference centre of knowledge for its wide network of universities and research centres. We want to take advantage of the drive and effort to crystallise new projects such as the creation in Barcelona of a UNESCO Institute specialising in Higher Education. Rest assured that if UNESCO is looking for a partner to develop this initiative, it will find one in the Government of Catalonia.”

Barcelona will host the third UNESCO World Conference on Higher Education (WHEC2022), a world-renowned event that will welcome around 2,000 people in person and around 8,000 people in virtual format. Thus, Barcelona will become the capital of higher education for a week.

During the press conference, Jordi Martí, Deputy Mayor for Culture, Education, Science and Community of the Barcelona City Council, remarked how “the choice of Barcelona to host the UNESCO World Conference on Higher Education for the first time shows the potential of the city as a global benchmark for a university city”. The representative of the City Council has highlighted the importance of the parallel events of the World Week, which “transfers the debate and reflection on the future of our universities to all citizens”.

The president of the ACUP-GUNi and Rector of the University of Lleida, Jaume Puy, has reflected on the importance of this event for the university sector: “After a few years of forced and sudden changes, it is a good time to rethink education The world conference organised by UNESCO in Barcelona next week is a great opportunity to reflect and debate how higher education should be and what it should do to meet the demands of a knowledge society. The work of the universities for the creation of knowledge and its transfer, unites Institutions that have to lead a more sustainable, open, inclusive society, concerned about the well-being of people.”

Held in 1998 in Paris, the first World Conference on Higher Education was planned as a ten-year event. For the first time, this 2022 the WHEC is celebrated outside the UNESCO headquarters. On this occasion, Barcelona will bring together a very varied audience, with high-ranking representatives of governments from around the world, rectorates of world universities, heads of international university networks, students, institutions, NGOs and companies, as well as other experts in the field of higher education.

The objective of WHEC2022 is to rethink the ideas and practices of higher education to guarantee the sustainable development of the planet and humanity. Through the collective construction of the multiple actors represented, the Conference seeks to become a global conversation fuelled by diverse narratives about higher education. Within the framework of WHEC2022, UNESCO will present the roadmap that will guide the university sector over the next ten years to make it a key player in the face of the difficulties and socio-sanitary crises of current times.

In relation to the roadmap and the future of the sector, the Head of UNESCO’s Higher Education Division, Peter Wells, has highlighted that higher education, as “an integral part of the right to education, can and should contribute to forging a new social contract for education capable of unleashing talent and guiding the ecological and digital transition towards a fairer and more sustainable future. To achieve this, higher education systems must be more open, collaborative and resilient”.

In this context, and taking advantage of the boost offered by the UNESCO commission, Barcelona aspires to become a world university capital, giving continuity to the conclusions and recommendations of the WHEC2022 and launching innovative and high-impact programs promoted by the different institutions of the territory and under the coordination of the worldwide GUNi network.

From the Diputación de Barcelona, ​​the president Núria Marín highlights the implicit recognition of UNESCO’s assignment to the “advanced pedagogical tradition [of the territory], which is based, like university education on a European scale for centuries, on an active and powerful network of cities.

Among the events included in the Conference, the presentation of the new GUNi World Report, entitled New Visions for Higher Education towards 2030, stands out. More than 90 experts from around the world have participated in it with the aim of reflecting on how to transform universities in response to the new social, economic, cultural and technological challenges and the UN Sustainable Development Goals. The presentation will take place on Friday, May 20 at 9:30 a.m. Once the Report is presented, it can be found in open access on the web with the aim of spreading knowledge throughout the world.

WHEC2022 has the direct support of the Government of Spain, the Generalitat de Catalunya, the Barcelona City Council and the Barcelona Provincial Council. The organization is run by UNESCO, in collaboration with GUNi and ACUP as local strategic partners.

Government to force international schools to teach more in Spanish