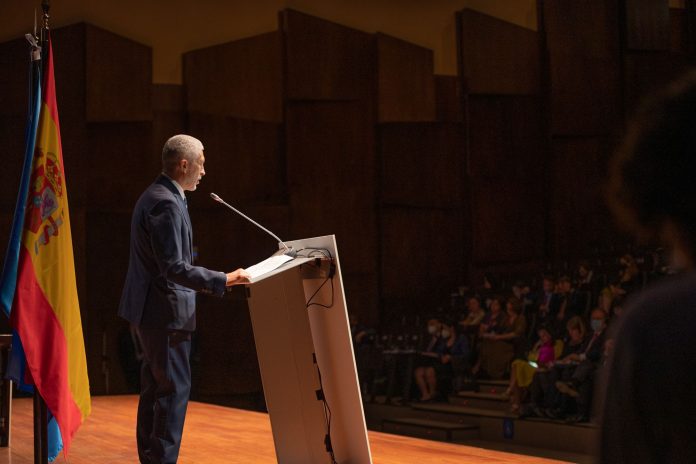 The Minister of the Interior, Fernando Grande-Marlaska, proclaimed that “in the defence of human rights, in the fight against terrorism and in the protection of its victims, the international community will always find its strongest ally in Spain”.

Grande-Marlaska and the Deputy Secretary General of the United Nations Office for Counter-Terrorism (UNOCT), Vladímir Voronkov, closed the High-Level International Conference on Human Rights, Civil Society and the Fight against Terrorism, which was organised by the UN and the Government of Spain and which took place this week at the Palacio de Ferias y Congresos in the capital of Malaga.

In his speech, the Minister of the Interior recalled that “Spain is a country that can testify to the harshness with which terrorism hits democratic societies, but it can also prove that democratic values ​​offer us useful instruments to defeat the terrorist organisations”.

Grande-Marlaska explained to those attending the international conference that the experience accumulated and the lessons learned in the fight against terrorism have allowed Spain to equip itself with a protection scheme against this phenomenon embodied in the National Strategy Against Terrorism. This strategy, the minister pointed out, is executed through the Specialised Committee Against Terrorism, a body created in 2020 and chaired by the Secretary of State for Security, Rafael Pérez, whose mission is to assist the National Security Council in the planning and coordination of the fight against terrorism.

In addition, Spain has strengthened its counter-terrorist capabilities by designing specific plans, among which it cited the Plan for Prevention, Protection and Anti-terrorist Response; the National Strategic Plan for the Prevention and Fight against Violent Radicalisation; the Intervention Program with Jihadist Inmates in Penitentiary centres, and the National Strategic Plan against the Financing of Terrorism.

To end his speech, the Minister of the Interior recalled that “Spain has a pioneering law, Law 29/2011 on Recognition and Comprehensive Protection of Victims of Terrorism, whose preamble proclaims that they are victims of serious human rights violations, which reinforces their normative status and links their rights to the constitutional and universal values ​​of open and democratic societies”.

At the end of the closing ceremony, Grande-Marlaska and Voronkov held a bilateral meeting in which, among other issues, they addressed the process of opening a regional UNOCT headquarters in Madrid, which will come into operation this year.

The Minister of the Interior took advantage of the meeting to convey to the Deputy Secretary General of the United Nations Spain’s support for the holding of the first Global Congress of Victims of Terrorism, scheduled for September in New York.

In this conclave, which will place victims at the centre of the debate on the fight against terrorism in the international context, Spain wants to promote the creation of a global network of victims’ associations.

The High-Level International Conference on Human Rights, Civil Society and the Fight against Terrorism held in Malaga culminates a series of works programmed by the UNOCT to design a paradigm that improves the mechanisms to prevent and counteract the terrorist threat.

Inaugurated on Tuesday by the Minister of Foreign Affairs, European Union and Cooperation, José Manuel Albares, the conclave has brought together representatives of numerous UN Member States, entities dependent on this international organisation, various international and regional organisations, institutions that defend human rights and various experts in the different subjects dealt with.

The working sessions, held behind closed doors, have had the participation of two members of the Spanish Ministry of the Interior: Manuel Navarrete, director of CITCO, and Montserrat Torija, general director of Support for Victims of Terrorism.

Sánchez will meet with Biden on Tuesday