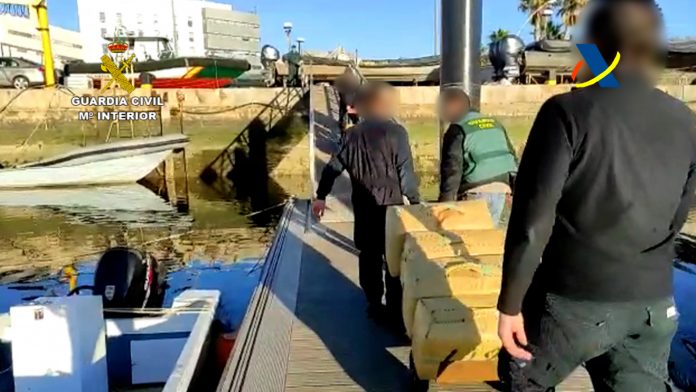 The Guardia Civil and the Tax Agency have dismantled an organisation that introduced large quantities of hashish along the coasts of Huelva and have arrested 17 people and seized almost three tons of hashish.

Both Customs Surveillance and the Guardia Civil learned that a criminal organisation was introducing, through recreational boats, bundles of hashish in the Isla del Moral area, in Ayamonte, for which the so-called ‘Mastín’ operation was initiated with the intention of dismantle the organisation.
The researchers learned of the acquisition of an industrial warehouse in Ayamonte by members of the organisation, which would serve as a logistics center and nursery for boats and engines, as well as fuel storage.
On the other hand, last November a boat belonging to the organisation was detected that was sailing at high speed and without lights. After organising a joint operation, investigators observed that, upon reaching land, the suspects unloaded the boat and loaded the bundles into a van.
The driver of the vehicle ignored the light and acoustic signals of the police vehicles and even attacked them. After several minutes they managed to arrest the driver, who is accused, in addition to a drug trafficking crime, a crime against road safety. 30 bales of hashish were found in the van, weighing approximately 960 kilos.
After this fact, an investigation was continued and in December of last year the organisation’s activity was detected again: the investigators located two recreational boats navigating at low speed and without any lighting in the vicinity of the Carreras river. Both boats had two crew members each and seven metres in length, in addition to powerful outboard engines. The organisation was operating in the same location as in the previous cache and also using a van to transport the drugs after unloading. At that time, the agents intervened, arresting seven people and seizing 55 bales containing about 1,760 kilos of hashish and the van, which had previously been stolen.

Boats with non-existent or false identification

The Ayamonte-based organisation used recreational boats with powerful engines to introduce drugs, which carried out transshipment on the high seas from RIBs from Morocco. These recreational boats lacked the required identification, or had false identification, or had simply been stolen.
Once there is full knowledge of the organisation and its way of acting, the Court of First Instance and Instruction number 4 of Ayamonte is requested to carry out five domiciliary searches and a search of an industrial warehouse. In one of the houses, located in an urbanisation in Ayamonte, 60 kilos of hashish and 16,000 euro in cash were found. In addition, five boats prepared for landing that were anchored in Ayamonte were seized and another nine people were arrested.
Finally, the ‘Mastín’ operation has ended with 17 detainees, including the leaders, residents of Ayamonte. In addition, a total of six boats, two long guns and 16,000 euro between cash and foreign currency, as well as two vans and ten passenger cars have been seized.